This week I have been enjoying working on want to rather than need to projects. So the pressure has been off me, which is just as well as the husband has had a really pressured week and there in only room in the household for one person under pressure at a time!

Today I have finished the top of my afternoon tea quilt that I started many moons ago, and has been gathering dust wrapped up in a map roll on top of the wardrobe ever since. As the quilt was intended to make use of an embroidered panel there was no pattern for the top, so I had drafted out the cutting and sewing measurements myself. Although I knew maths was never a strong point of mine, until today I hadn't realised quite how bad I was! According to my calculations I needed 28 6.5" blocks for the second border on the quilt, so I duly cut and pieced 24 Friendship Star blocks with the intention of making 4 different blocks for the corners. When I laid out the quilt centre and pieced Star blocks I discovered that my calculations had been way out, instead of needing 28 blocks in fact I only needed 20! So out with the seam ripper to take off the extra 2 blocks on 2 strips. 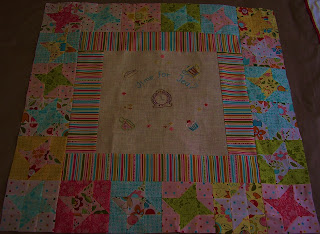 The dodgy maths mean though that I have 4 Friendship Star blocks ready to make up into a matching cushion, so it wasn't all bad.

I would love to be a bit more adventurous with the quilting on this lap quilt and ideally, quilt some form of teacup in the striped border and on the linen centre, but that may just be a bit over-ambitious as I have never even tried free-motion quilting! All tips will be much appreciated.

Last weekend there was a large pan-Baltic Folklore festival in Riga, part of which was a Craft Fair and open-air concerts in one of the City parks. I was delighted to see these girls with their flower headdresses working on their looms and thought you might like to see them too. 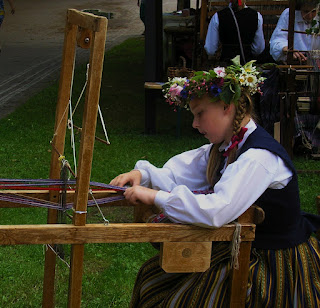 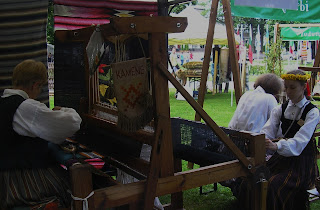 And just to prove that all you need is attitude to carry off the flower wreath look! 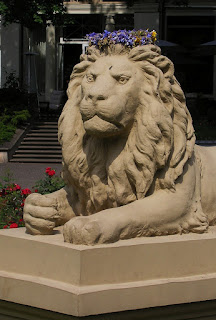 Have a great weekend.

Linking here and here
Posted by Celtic Thistle at 15:02