Three down, twenty-one to go!

This weekend I decided to forget all of the commitments I have signed myself up for and spend some time working on a project that is just for me. I started my Time for Tea quilt a while ago to make use of a piece of embroidery that had been gathering dust in the cupboard. The first border has been attached for a while and the 2.5" squares for the Friendship Stars I had planned for the second border have been cut for ages too, so this weekend I decided was the right time to make some more progress.

I discovered when I started marking the squares for HST's that I had been too generous in my cutting and had twice as many squares for the triangles as I needed, so I only needed to mark, sew and cut 96 squares! Still, there is a quilt in the Sunday Morning Quilts book that I would like to make sometime that uses leftover triangles, over 500 of them (!), so at least now I have the start of a triangle stash :)

Ignoring the rising heat and then thunderstorms around me, I determinedly ploughed on with the sewing and cutting to produce 72 pieced strips for the blocks. 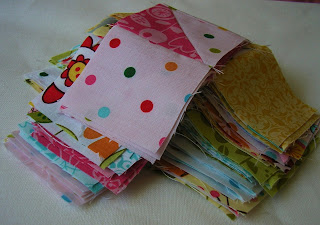 The fabric is Sunny Happy Skies by Riley Blake and is rightly named, because they are such cheerful fabrics. I had time, just, before the Men's Championship Final at Wimbledon kicked off to get a couple of Friendship Stars sewn up too. 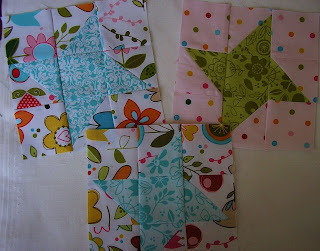 Whilst watching Wimbledon my latest project from Made in France, Cross -stitch in Red, white and blue was the particularly apt strawberry pattern. I stitched it on a small hand towel that I bought in a textile factory outlet in Estonia on our last trip there. Fortunately being one colour the pattern was not too complicated as I couldn't have coped with the anxiety of watching Andy Murray's gallant performance and a complex cross-stitch pattern! 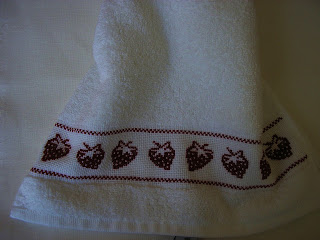 Hope you have all had a productive weekend too.

Rebecca has a Christmas in July event going on at the moment, so if you want to be more organised this year (or in my case just organised) be sure to check out her blog!
Linking up to Manic Monday
Posted by Celtic Thistle at 13:13