Seashells on the Seashore

I recently attended a workshop given by the inspirational Toni Hanley. The theme for the workshop was Seashore and shells, so we were asked to bring along bits and pieces such as beads, buttons and shells to add to our embroideries.

Never having worked with shells in an embroidery before, they were the first of several New to Me's that I was introduced to in the workshop!

The first element of the piece to be made involved colouring some silk fabric with paint. 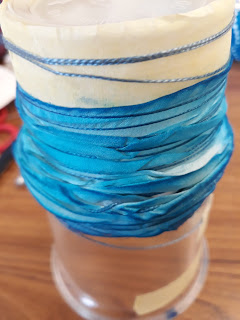 We wrapped the plain silk fabric around a plastic cup and tied it tightly with cotton thread then painted over the scrunched up fabric with silk paint and left it to dry. 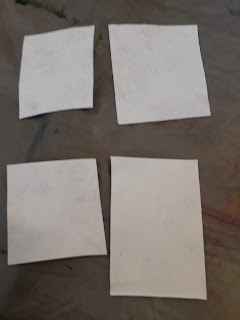 Then we cut up pieces of Tyvek, a definitely New to Me fabric, before attacking them with an iron and heat gun. I discovered that Tyvek, which is used in the making of items as diverse as envelopes and housewrap (!), is a favourite of mixed media artists, due to its capacity to warp and bubble when heated whilst retaining sufficient softness to allow for stitching through it. 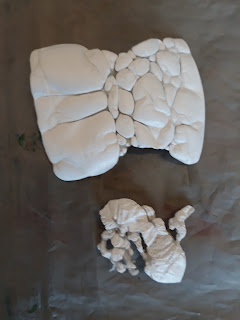 This is what happens to those flat pieces of Tyvek after they have come into contact with a hot iron!

A dab of silk paint later and they were also left to dry. 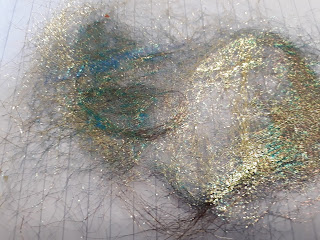 Next up bonding Angelina Fibres with the iron to create a shimmering piece of fabric. Another New to Me too :) 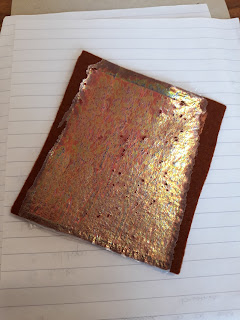 Finally we ironed some painted Bondaweb to a piece of felt and covered it with a layer of iridescent film, as you have probably guessed another New to Me, and we were all set to start embroidering. 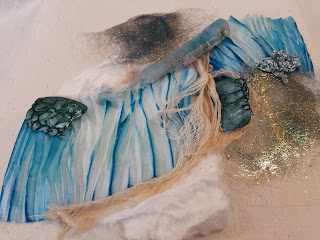 A couple of happy hours later and I had this to show for my day. The darker pieces are the painted Tyvek and the long piece at the top of the silk is a silk cocoon that has been teased out and painted.

I absolutely loved working on this and have been stitching away on it every chance I get ever since so, hopefully, will have a finished piece to show you in the not too distant future.

So, that's my New to Me's this month, now it is over to you to link up what you have been up to for the first time in March. As always, the link will remain open until the end of the month so you still have time to give that technique a whirl that you have been pondering about for a while :) Don't worry either if things didn't quite go as planned, we are all about the triumphs and tribulations here and who knows maybe someone else has had the same problems as you and knows a great fix. So share those New to You's with your fellow bloggers who are always up for anything that will extend their creative boundaries!


If you have some finishes in the pipeline there are still some host spots available for the TGIFF link party in the coming weeks, sign up here and maybe tick another New to You off that list!