By the time you read this I shall be well into my annual Christmas Market trip with my lovely daughters-in-law and our youngest son's lovely partner. Well I hope I am as I am writing this the night before I head off very early next morning!

This year we will be tasting and testing the delights of Prague's Christmas Markets. 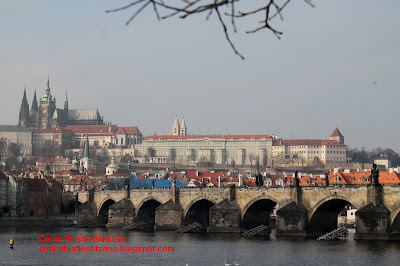 I last visited Prague in February 2014, where I took this photo of the Charles Bridge. I think it might be a bit colder in December :)

To get us in the mood for Christmas shopping I made some small gifts for the girls for the trip. 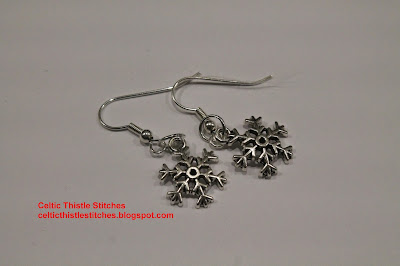 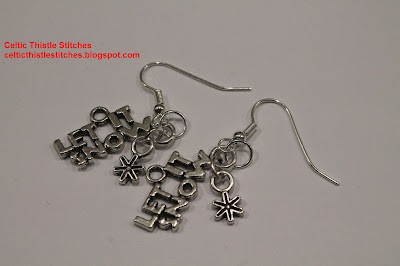 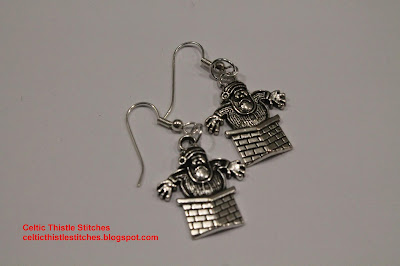 Santa in the Chimney earrings. I couldn't resist these charms as last year our grandson entertained us all with his Santa getting stuck in the chimney song for hours :) 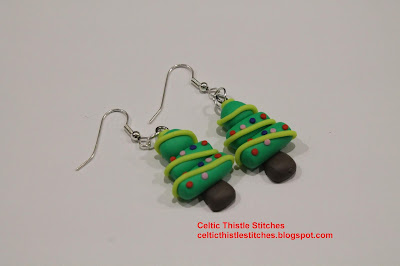 And for me, these polymer clay Christmas tree earrings.

All of the charms for these earrings are from Beads Unlimited, they had a great selection of Christmas themed charms and beads and on the day I ordered them 15% off all charms! 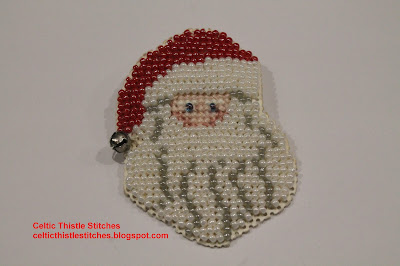 In years past I would always bring my Mum back some scented decorations from whichever Market I had visited. This year, I will not be able to do that but as I came across this beaded Santa brooch that she had made when I was clearing out Mum and Dad's flat in February I will be wearing it on the trip instead.

So, if you happen to be in Prague at the weekend and you see a group of females bedecked in Christmas jewellery testing all of the various Mulled Wine variations and sampling all of the many cakes on offer give us a wave :) 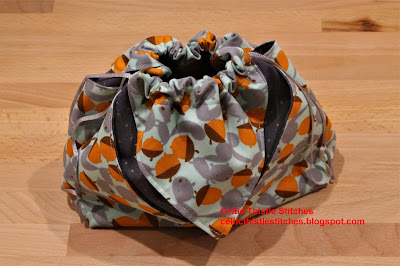 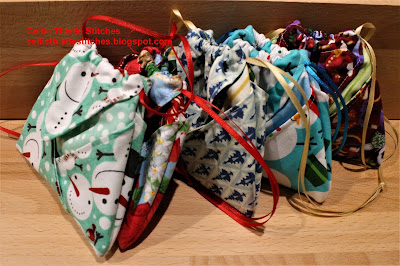 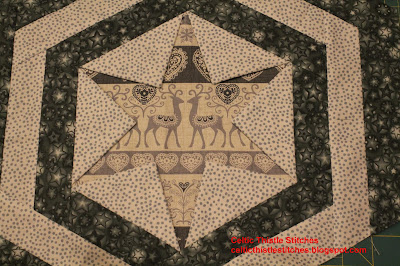 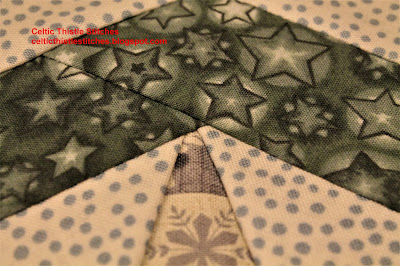 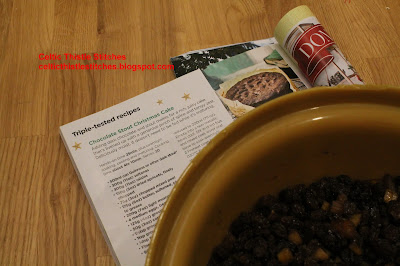 Today is the next reveal in the Endeavourers Quilt Group, this quarter the theme for our quilts was "Dreams" and it was a bit of a struggle I have to say. My original plan for the challenge was to create a Dreamcatcher but I could not get what I wanted, something transparent and flimsy, to work as a quilt, so with a week to go to the deadline, it was time for a rethink! 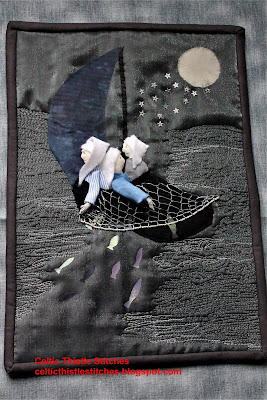 Thinking about dreams got me to thinking, naturally, about sleep and then to the rhymes and songs we used as parents, and now as grandparents, to encourage our children and grandchildren to sleep. One of the first to come to mind was the lovely image of Wynken, Blynken and Nod fishing from their shoe boat. I am not sure that our boys were particularly taken with the poem, but they did like the names :) 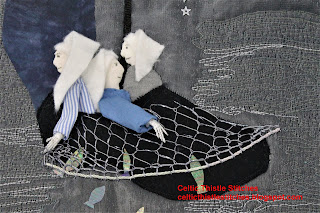 When I came across the image of this black and white illustration for the poem I had my inspiration for the challenge, so, fishing from a shoe boat it was.

Like the illustration I wanted to create a shimmery, dreamy feel to the quilt so I covered a piece of black fabric with a layer of white voile and used that as the background for the applique and quilting. 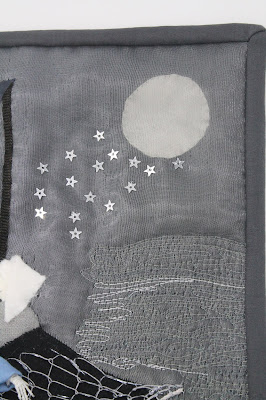 The silvery moon was stitched behind the voile but everything else was added on top of it.

In contrast with the usual order of things I started with the quilting for the rippling water, which was quilted in three different shades of silver and grey. The lightest shade was used to represent the frothy tops of the waves.

Once the quilting was finished I started on the figures. They turned out to be a somewhat involved process!

I have been wanting to try stumpwork for a while and decided that this was my chance :) Dusting off my copy of Stumpwork Embroidery by Kay and Michael Dennis, I set to work. First up were the heads of my figures, which required wrapping and gluing calico around a cardboard shape and then stuffing the tiny shapes with toy stuffing. That was very fiddly, but not as fiddly as creating the hands! They were in a class of their own for fiddlieness :) 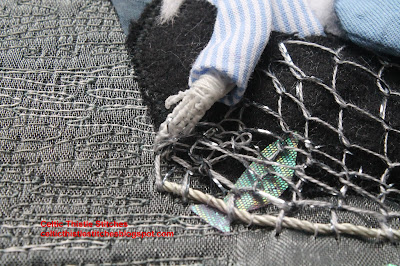 The hands and arms are made by wrapping and gluing thread around a paper-wrapped wire, then wrapping four wires together and adding a fifth for the thumb then continuing to wrap the thread around to create a wrist. Fortunately I bought several different thicknesses of paper-wrapped wire in Japan so I had all the supplies on hand but holding the wires, wrapping them and trying not to get glue everywhere was challenging to say the least :) The result does at least look like a hand even if it is not a particularly child-like hand!

I wanted the only real colour in the piece to be from the figures so they are all wearing nightshirts, made from old cotton shirts, and have felt nightcaps to keep their heads warm. (It also saved me from having to create hair!)

Looking at the image now though I might add a line of stitching to the third figure to suggest an arm as he looks a bit strange to me without one, and there isn't really any room in that boat for another stumpwork arm! 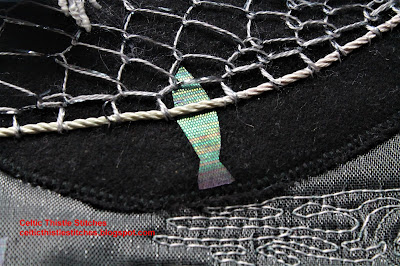 According to the poem Wynken, Blynken and Nod were fishing for herring fish, that were the stars in the sea, so my herring fish were created from fusible web backed shimmery voile and some of the dyed habotai silk left over from the sail. Above the shoe boat the stars twinkle and below it in the sea the stars become twinkling fish.

I enjoyed trying out lots of new and different techniques for this challenge, and I am pleasantly surprised with how this turned out. It is backed and bound as a quilt but I might put it in a box frame to give to a grandson for Christmas with a book of rhymes.

And in case you are wondering how the rhyme of Wynken, Blynken and Nod goes head on over to my post on the Endeavourers blog where you will find it and all of the other amazing quilts that this challenge has inspired!