I have been playing with my new toy, the EQ7 software and it is definitely challenging my poor brain! Still they say that it is good to keep your brain active with puzzles so I console myself with that thought when I am baffled.

One of the things that I wanted to do with the software was create my own patterns for fusible bias applique. I love Celtic Knotwork patterns and would like to recreate them in fabric.

I decided to start off with something easier though :)


The Cushion applique is based upon the Luckenbooth symbol with two entwined hearts beneath a crown. The Luckenbooth symbol is an ancient Scottish love token, which was often given to brides on their wedding day. There is a legend that Mary, Queen of Scots gave a Luckenbooth charm to Lord Darnley when they married, but as that marriage ended rather violently we will dismiss that as a bad rumour :) 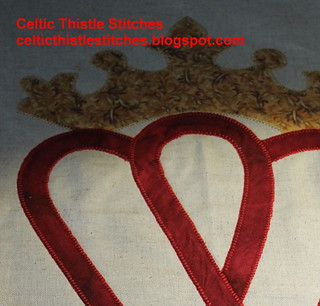 I made my favourite button closure for the back as the perfect buttons were just sitting in my button tin waiting to be used! 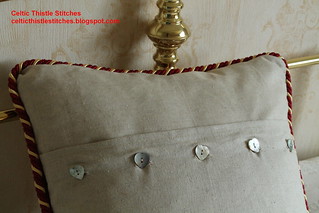 They are Japanese shell buttons from Woolmouse , which I bought when we visited the Market Hall in Richmond, North Yorkshire last year. I knew they would be perfect one day!

Whilst the fusible applique was straightforward, the corded trim was a bit of a nightmare! I found the trim in my stash, it must be several years old, but I couldn't have found a better match if I tried. Although I have attached piping on a cushion and bags before, I have never attempted to attach cord and such large cord at that. I discovered that my usual method of attaching with a zipper foot just didn't get close enough to the cord, so when the cushion was turned out the cord tape was still visible. It took another attempt with the piping foot, which was balanced precariously on top of the cord (!), to finally be able to stitch a line close enough that the cord tape didn't show.


If you have tried something new too this month, don't forget to link up to

The link up closes at 24.00 GMT today January 31st, so you still have time to link up no matter where you are in the world!

One lucky linker will win a copy of Quiet Play and Blossom Heart Quilts Ornamental and Sew Seasonal Bundle, that's 25 patterns up for grabs. So, if you have made a Christmas gift to tuck away for December or finished a Home Decoration project that didn't get finished in time for Christmas 2013, head on over to Mud, Pies and Pins to link up before the link party closes at 24.00 GMT January 31st too.

This is my first finish for the 2014 FAL and we are still in the first month, so I hope that bodes well for the rest of the Quarter!

It is also another project for the brilliant me,me,me Bee dreamt up by Moira at Kettleboiler to encourage us all to remember to make something for ourselves now and again.

Linking up to Crazy Mom Quilts