It is the start of a new FAL so time for optimism and wishful thinking :)

This year's FAL is being hosted by the multi-talented Katy otherwise known as The Littlest Thistle. Check out her post if you want to join in the fun.

Having only managed to finish 2 out of the 6 finishes I was hoping for in the last quarter of 2013, there are plenty of UFO's hanging around my sewing room patiently waiting for their turn on the sewing table. One of the 2 finishes I did achieve was a long-standing BOM so in an effort to continue that momentum I am putting the remaining 2 outstanding BOM's in my cupboard top of my list for finishing this quarter.

First up,the wallhanging I have been paper-piecing monthly with Quiet Play's BOM 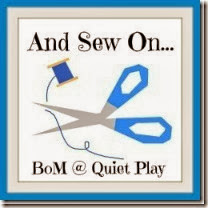 I had the last block of 9 left to paper piece (the photo below only shows 7 blocks as I haven't taken any photos of them altogether since I made the 8th block), but have decided that an 8 block wallhanging will fit better in the space available. So instead of paper-piecing the last block all that I need to do is add the sashing, baste and quilt it. Doesn't sound too difficult does it? 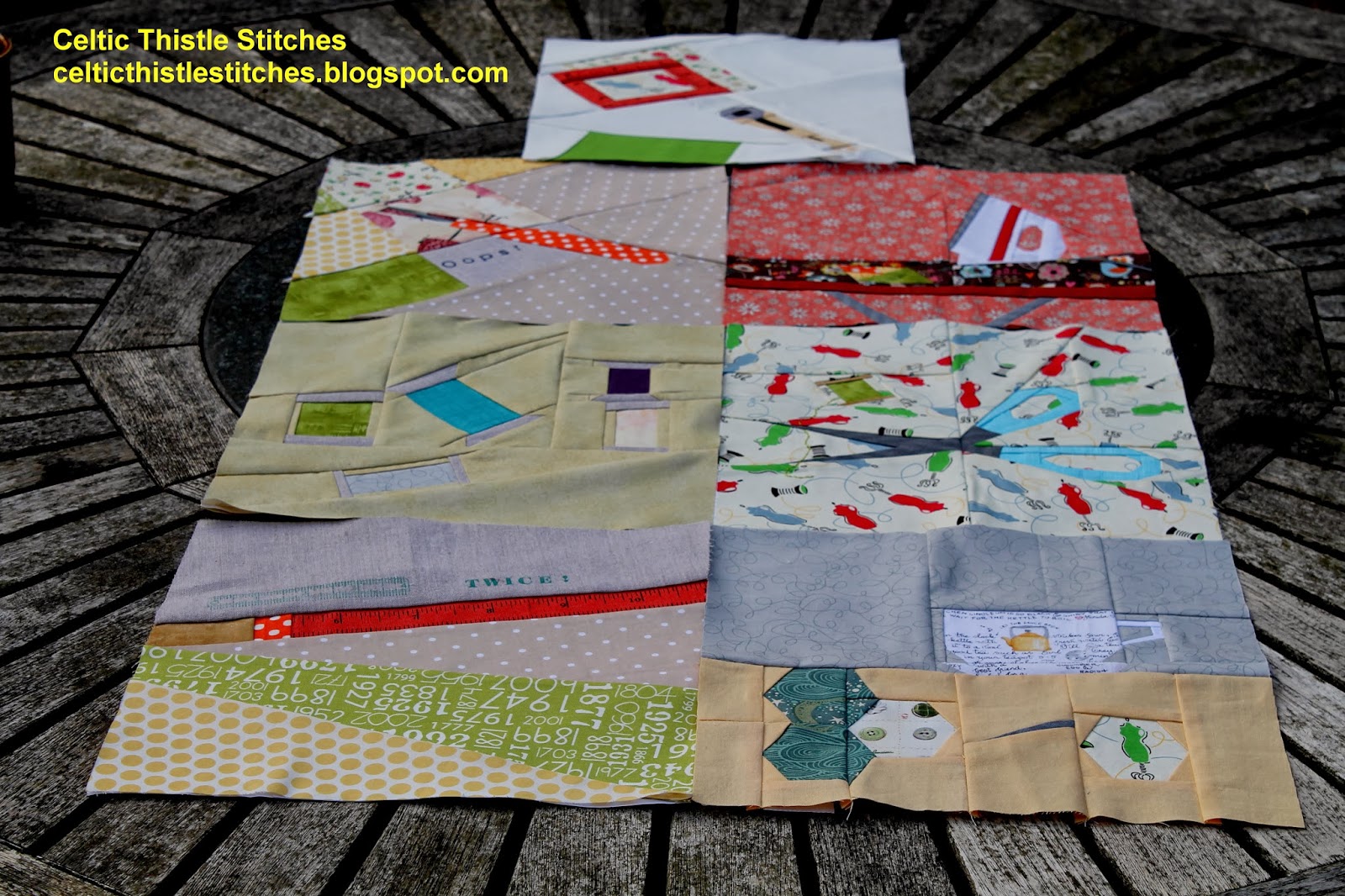 All the blocks are made (and have been made for months), the sashing fabric is purchased and waiting to be cut up so I just need to knuckle down and do it! It would be great to have this finished in time for my son and daughter-in-laws house move in the Spring, especially as it was also meant to be a Christmas present!

The third project I would like to finish this quarter is the cushion I planned from the New Zealand Falcon pattern by the very talented Tartankiwi.  Our local rugby team are known as the Falcons, and the males in this family are mad-keen rugby fans so it would be a fitting addition to our current collection of cushions.Would be nice to have it finished before the end of the rugby season too :) 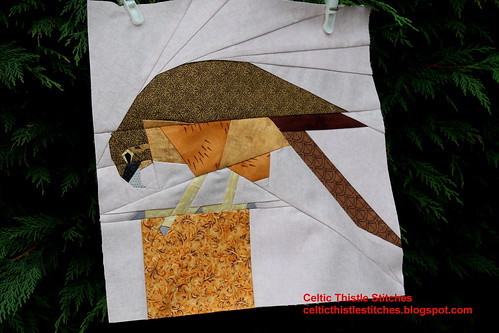 The fourth project I really would like to finish this quarter is the Bargello quilt that I started in a class last August. 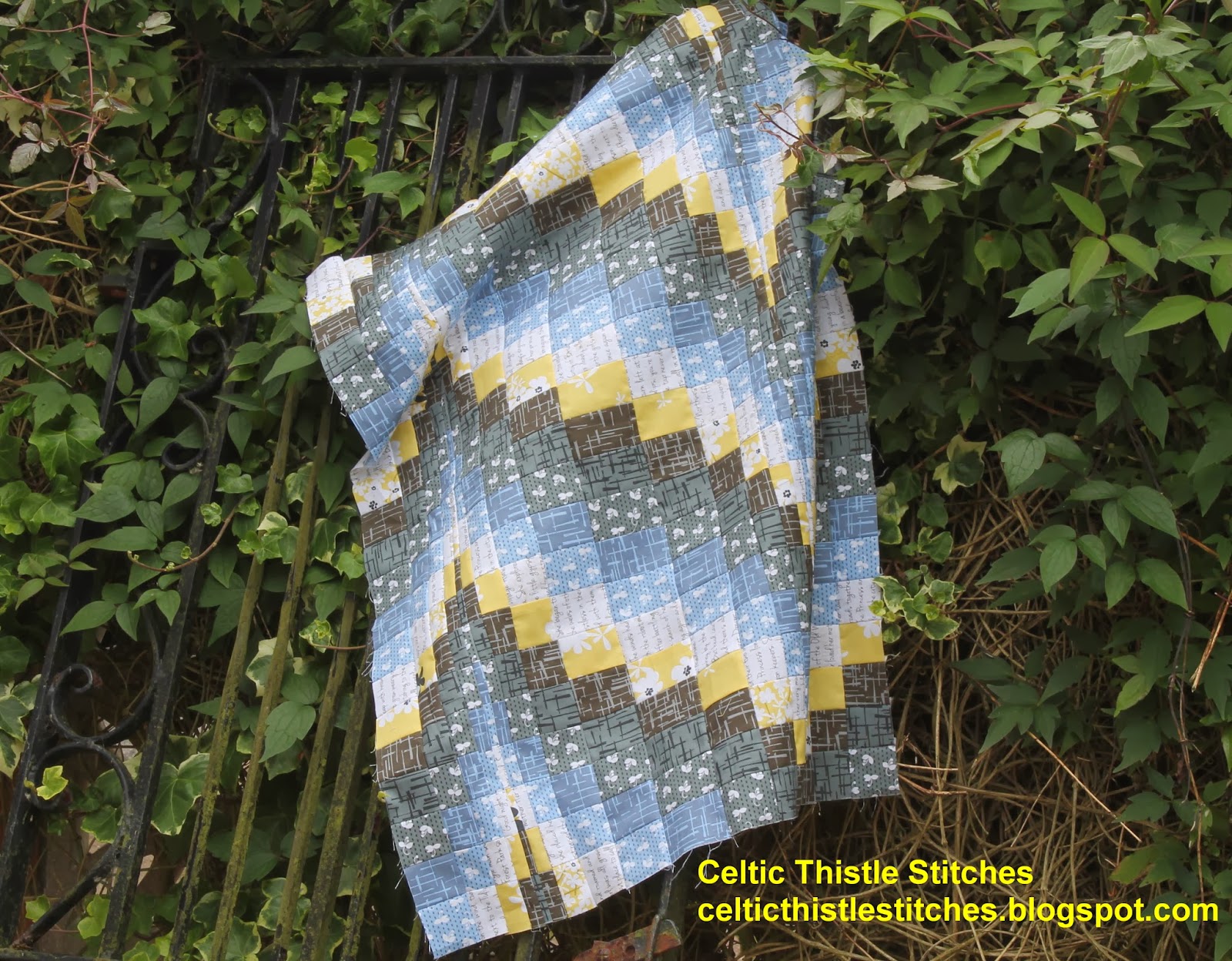 Again, all this needs is borders, basting and binding! Can you tell these are my least favourite parts of making a quilt??

The next set of projects have all been in my head for ages but I have never actually written them down anywhere, so I am hoping that by blogging about them I might actually get around to making them. So my fifth project for this quarter is another cushion, this time with some Celtic Knotwork applique. I know exactly what I want to do with this so I just need to knuckle down, draft up a pattern and sew it! 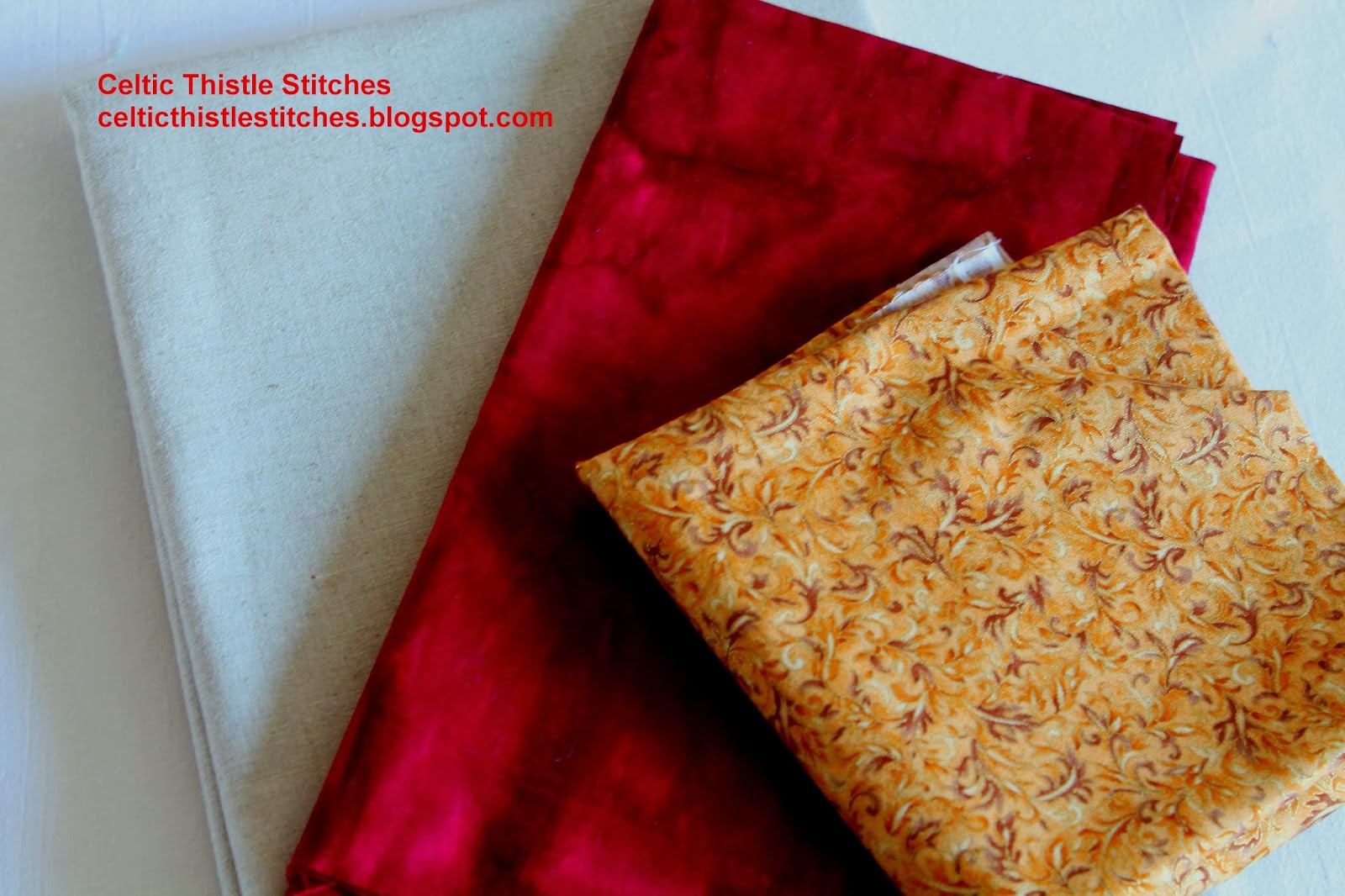 I am going for broke here with a sixth, seventh and eighth project :)

The sixth is another cushion, this time with Linen that I brought back from Latvia and some lovely Liberty fabric that I have been too nervous to cut into! 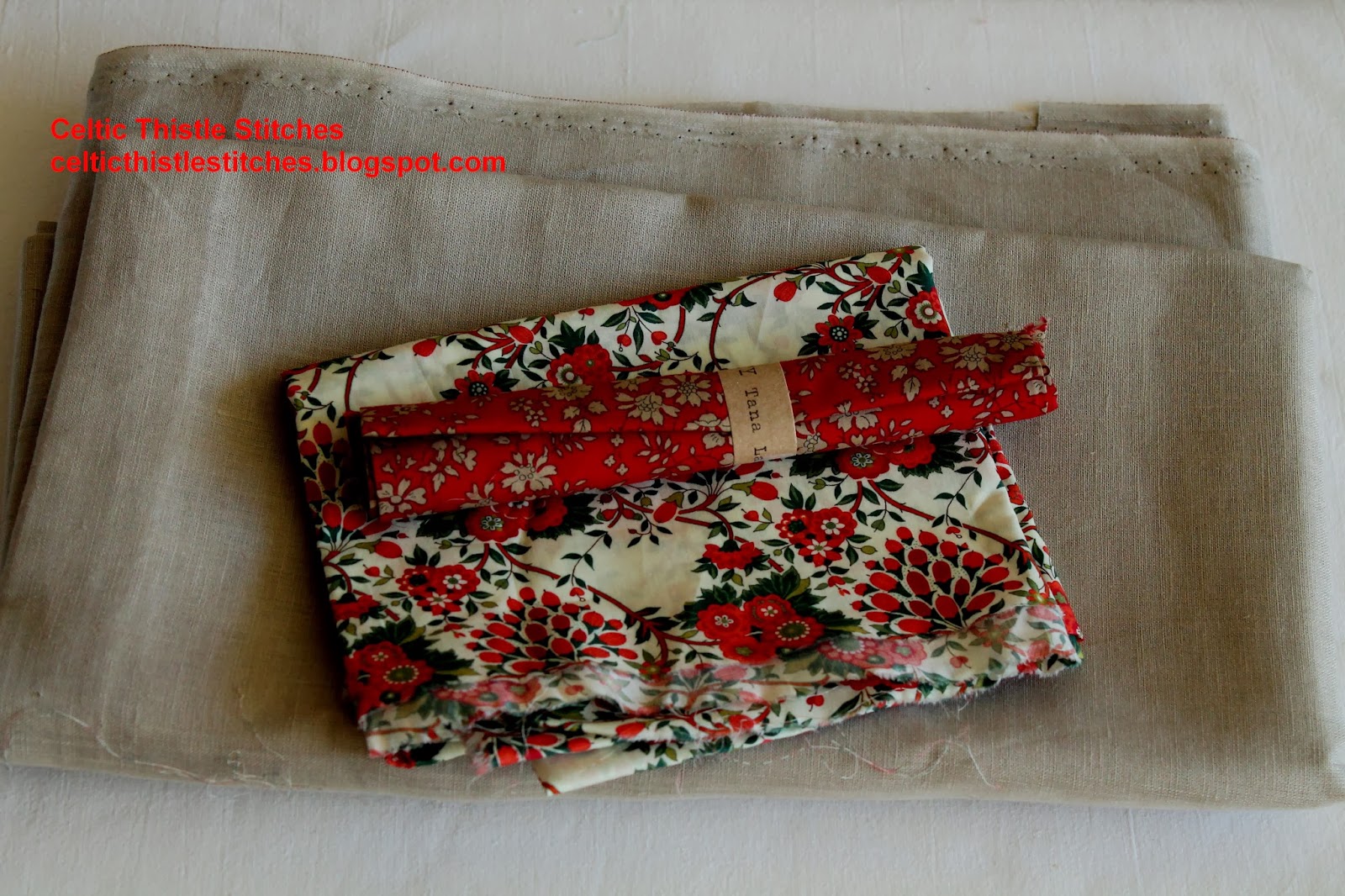 Again I know exactly what I want to do with this, I just need to sit down and do it!


More Liberty fabric and some vintage linen in the seventh project for a secret project that I am really excited about, that will, hopefully, be revealed later in the year. 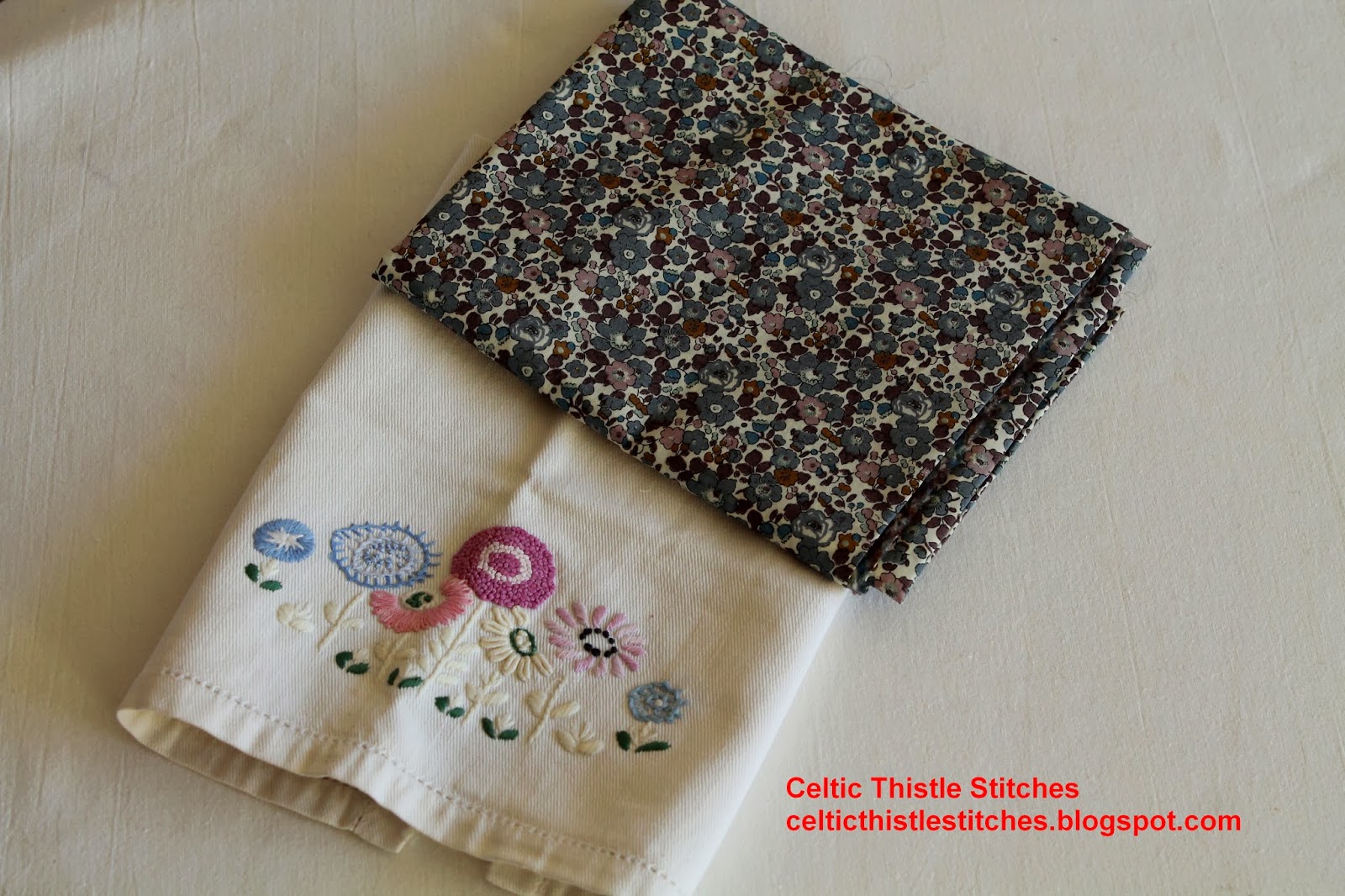 And finally (thank goodness I hear you cry!) a Christmas project (!!!) using these cute fabrics. The reason for this project will be revealed rather sooner than the one above in the next couple of days, but let's just say now that I am planning to be the most organised I have ever been for Christmas this year :) 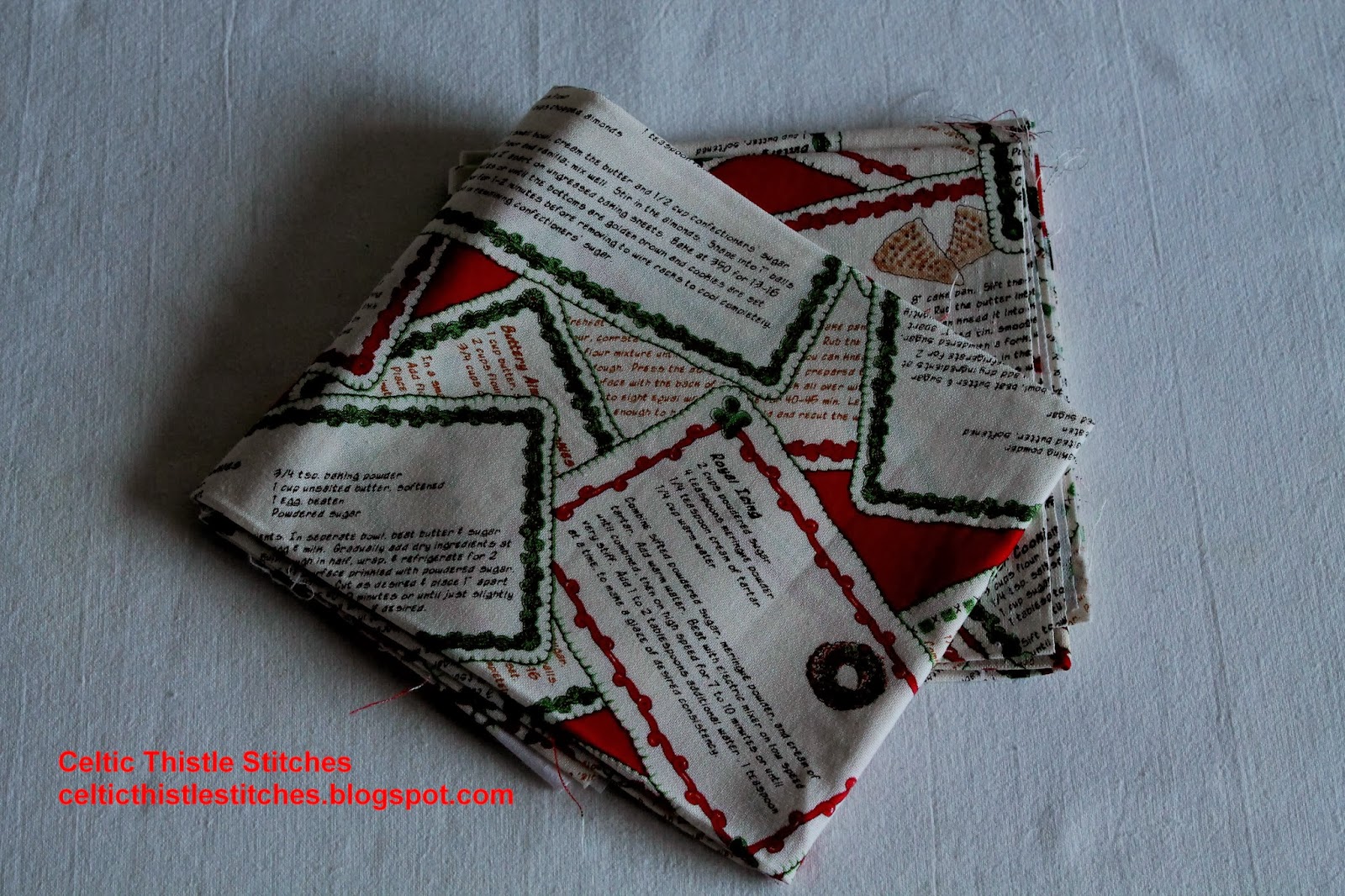 I think that is more than enough to be going on with, don't you?

One of my resolutions for 2014 is to use up my stash, and completing all of these projects will certainly help me to do that.