Beeing Queen for a month

Earlier this year I signed up for the Fat Stash Brit Bee and volunteered to be Queen Bee in April, which seems to have arrived rather quicker than I expected.

This is the first time that I have been in a Bee where I send fabric out to my fellow Bee mates and ask them to make a block (or two) and send them back. This meant that I had to be more organised than usual, and have not only bought the fabric for the blocks well in advance but also decided which block I would like, and sent the fabric out all in time for the first of the month! 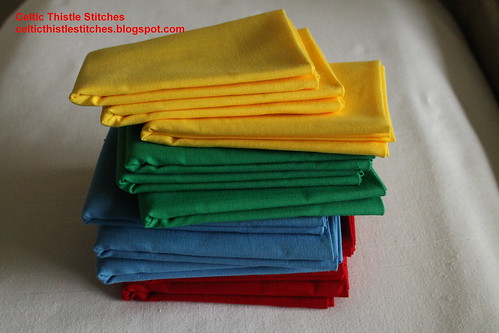 I bought these primary coloured solids when I went to the Scottish Quilt Show in Edinburgh in February with the intention of asking my Bee mates to make blocks for a quilt for my niece.

Deciding on the block to ask for was much harder! I leafed through all of my quilt books (about a dozen), flicked through all of the quilt patterns torn from magazines over the years (about a hundred!) and browsed blocks and quilts on Pinterest (you can just imagine the numbers!). Up to the day before I needed to send these fabrics out I still hadn't decided upon a final block. 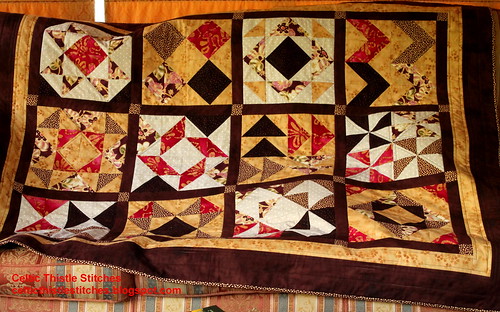 Snuggling under this quilt whilst catching up on the third series of Game of Thrones in time for the fourth series to start next week it came to me. I had a brainwave, or rush of blood to the head or flash of inspiration and not just because the actor playing Jaime Lannister had just stepped into the bath on screen :)

I would ask for HST blocks and make a quilt for my youngest son, who is regularly tucked up under this quilt when watching the hours of sport that he calls research. You would think that having to watch sport for work would mean that you wouldn't want to watch it when you are home but apparently not! 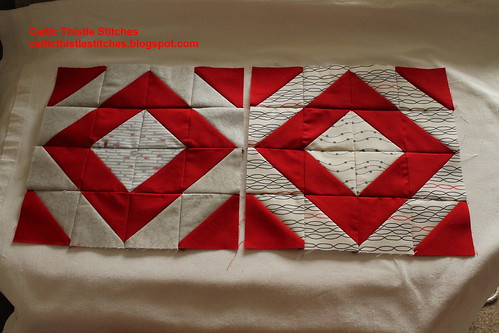 So I dug out some low-volume prints from my stash and stitched up these blocks as examples for my Bee mates.

With that decision made the envelopes were stuffed and in the post before the price of stamps went up today too. Now that was organised :)