There's a Moose in the Hoose!

Just in time for the Birthday Boy on Sunday I have managed to finish and photograph the Moose flannel pyjama trousers without him catching sight of either! 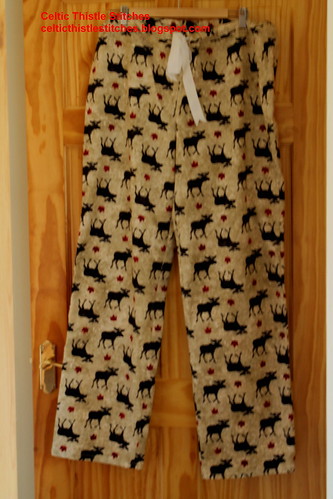 This is the first proper clothing that I have sewn since school, which was a very long time ago!

I used a pattern from the Great British Sewing Bee, which was given away for free in the newspaper. I didn't see all of the TV programmes so I have no idea whether they actually made pyjama trousers in the programme or not.  I would guess that they didn't make anything as basic as these to show off their sewing talents though :)

I am not too happy with the white ties, but they were all that I had on hand, so I might change them to black ones later, but apart from that I am thrilled to bits to have finished these in time and that they are recognisably pyjama trousers! I made the Large size as I know my son likes his pyjamas loose, but I am keeping my fingers crossed that they are not too loose!

Having all boys in the family there wasn't much incentive to get into dressmaking when they were small, but now that I have made these I think I might just be making some more next year for the rest of the males in the family.

I went to a Christmas Stocking workshop at Made cafe with a non-sewing friend recently. There were only 5 of us in the workshop, which meant we all had enough time and attention to complete our Christmas Stockings on the night so here's mine. 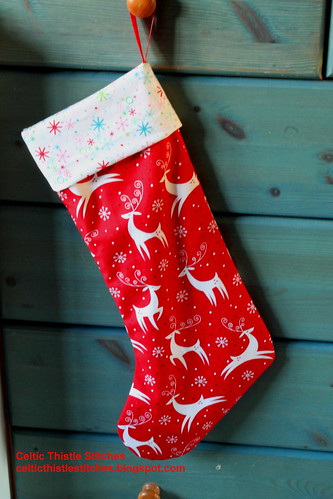 My friend was so thrilled with her first handmade stocking that she is talking of getting a sewing machine for Christmas :) Another convert, yay!

I have another workshop planned for this weekend, this time to make a Garland, so, hopefully will have more finishes to share next week too.

Neither the stocking nor the garland are on any of my to-do lists, but hey, lists are only an indication of things I would like to do when I wrote them aren't they :)

Linking up to Finish it up Friday