From Antiques to Zakka

Having polished off the backlog in my BOM's this week was also a chance to cross off at least some of my outstanding projects in the Zakka-style SAL. In my enthusiasm I had visions of completing at least 3 of my outstanding projects but, alas, the pesky Itty Bitty magnets put a spanner in those works! Who would have thought that such tiny little things could be such trouble, and I was only attempting three of them not the full six that are in the book? 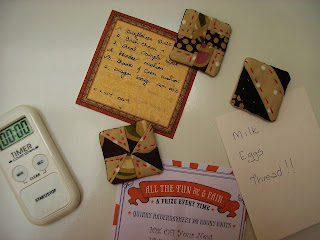 Wendy did warn me that whilst the piecing was fairly straightforward, if rather hard on the eyes, the real fun came with the last step to turn in and stitch closed the opening left for inserting the magnets, and so it proved. I can understand the desire to have nice, handmade things around you and it does lift the spirits to see patchwork every time I go to the fridge, but I am seriously doubting whether the trouble involved is worth the end result. My colourful peg fridge magnets are just as cheering and a lot less trouble. The problem lies with the tiny (to me at any rate) 1/8th" seam that is available to work with when trying to turn the last edge under, you are only talking about a few threads between you and a frayed edge - madness! I know that some quilters enjoy working on a miniature scale and produce the most breathtaking work, but having just attempted these magnets I am beginning to doubt their sanity :) Let's just say that I will not be attempting any miniature quilts anytime soon.

The trouble did not end when the seams were finally, if rather messily, tamed as despite having the same number of magnetic layers one of the magnets did not live up to its name and refused to stay put on the fridge door. I had, I thought, tested them all before sewing but I am now thinking that I might have put the sheets in the wrong way round on this one magnet, needless to say ripping out the seam to turn the magnet round was not even considered as an option! Instead, I attached another piece of the magnetic sheet to the back of the magnet and it now sticks beautifully. 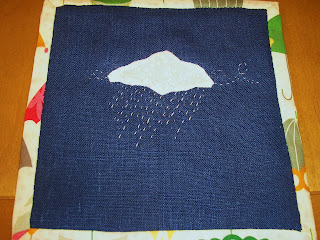 Fortunately the second of my catch-up Zakka-style projects was much more enjoyable. When we were in Tallinn last week I bought some blue linen to make the Cloud Mug Rug from the book. I had already received the perfect umbrella fabric for the backing in Hilacha's Novelty and Solid's Layer Cake Swap. The mug rug project particularly appealed as it involved needle-turn applique, which was a new technique for me and also some hand and machine embroidery. 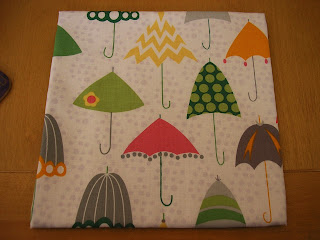 As it turned out I used hand embroidery for both the embroidered sections. The needle-turn applique was quite fiddly to do, but I am glad that I have had a chance to at least have a go at it. Indeed I found the whole applique and embroidery so relaxing to do that I have cut out linen squares for a whole set of mug rugs, which I am hoping to base on the weather symbols in a local newspaper. The third project I had planned, the organiser, I will hopefully get around to over the weekend. 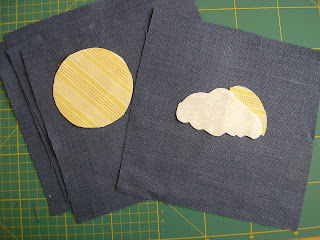 I thought you might like to see another market from Latvia. Last weekend we visited a bi-annual Flea Market some distance outside Riga that one of my husband's colleagues had told him about. The stalls ranged from carefully laid-out antiques and paintings to rugs on the ground with a motley selection of household goods. I had wondered whilst we were walking to the venue why most of the other visitors seemed to be male, but wondered no longer when I saw the stalls below! 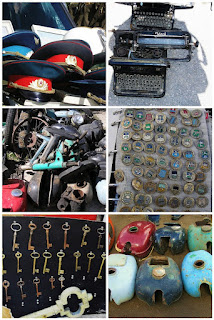 The variety of car and motorbike parts available in various states was fascinating to see, as was the strange assortment of purchases being carried out of the market. The men didn't have it all their own way though as these beauties were also for sale 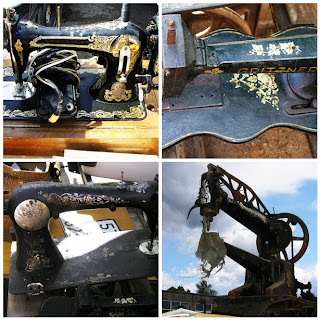 It certainly made me appreciate the speed and power of my modern Singer machine if not the rather bland looks compared to these ornate machines :)

Linking up to TGIFF
Posted by Celtic Thistle at 10:25