The city of St Petersburg has been on our list of places to visit for many years and with it being so much closer since we have been in Riga, it seemed like an obvious place to go. Holding us back though was the need to send off our passports for anything up to 3 weeks, what if something happened at home and we needed to get back quickly? So when we discovered recently that a Russian ferry line were running visa-free cruises to St Petersburg from Tallinn, we hot-footed it to their offices to book up. The ship leaves Tallinn in the evening and arrives early morning in St Petersburg, leaving in the evening the same day so we would have a whole day to enjoy the delights of St Petersburg before heading on to Helsinki, the next port of call and getting another ferry back to Tallinn. It sounds like a lot of travelling for a day, but the trips to and fro from St Petersburg were both overnight sailings and the ferry from Helsinki to Tallinn only takes a couple of hours, so it wasn't as much as it sounds. We found out later that we could have booked a 72-hour stay in St Petersburg, still visa-free, so would have done that had we known.

St Petersburg was all that we imagined it to be and more! We were lucky that the weather was glorious for the day of our visit, so the city was seen at its' best. 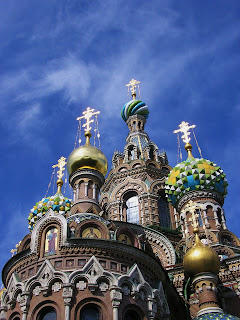 This is another view of the Church of the Spilled Blood, look at the colours in those towers, aren't they spectacular? On the day we visited the Church was not open to the public, and as it is just as fabulous inside as out, we have a ready-made reason to return! 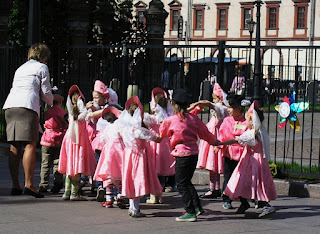 These children were dancing outside of the Church and having a great time. 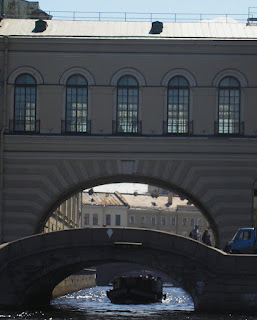 We went on a river cruise, which had a Russian commentary and as we don't speak Russian, we had plenty of time to enjoy the views and bask in the sunshine! 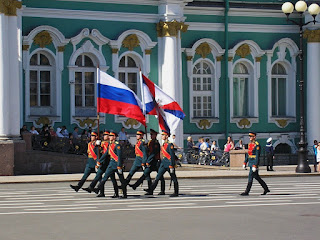 We were lucky enough to catch a military parade in front of the Hermitage too. We didn't have time either to take a tour of the Hermitage, but as the guide told us on our morning tour of the City that it would take 3 years to view all of the exhibits, we didn't feel so bad about not having the time! Another reason to return. 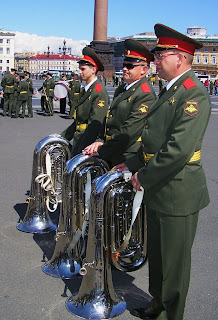 Don't they look smart? They sounded good too.

With overnight crossings both ways I had plenty of time to try out a kit that I had bought on my last trip to London. The kit was for Dorset buttons, which I think I had read about a long time ago but had never come across a kit for before. 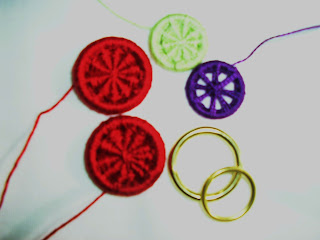 They were surprisingly quick and simple to do, once I had got the hang of it. The large red ones are from the kit. The first one I made is the lower of the two, and then I went out and bought some more brass rings and thread to make the smaller ones. To make them you just wrap the ring in blanket stitches, turn the rim of the stitches to the inside then wrap the ring several times and stitch alternate spokes to create the centres. More instructions can be found here I used pearl cotton for the green and purple buttons, but you could use stranded cotton as well. They are an ideal project for travelling as they require very little in the way of equipment.

We are off to Edinburgh next for our youngest son's graduation, so I have been toying with the idea of English paper pieced hexagons for my Star of Africa Bee block, sounds like the perfect project for travelling!


Hope the weather in Edinburgh is as good as it was in St Petersburg :)