Zakka in the pink

With wall to wall sport on the TV over the weekend to keep the husband occupied (think rugby, cricket and football!) it was the perfect opportunity for me to get cracking on some of the Zakka-style SAL projects I have been stockpiling recently.

First up was the organiser, which was the project for the week just gone. I wasn't too sure about this project at first, but as I had some nice, bright pink and white dotty linen/cotton blend that I had already earmarked for this, I decided to go with it. I am so glad that I did, as I really enjoyed putting this together, which is not to say that it all went perfectly but even the mishaps didn't put me off, so my faith in the Zakka-style book was restored. 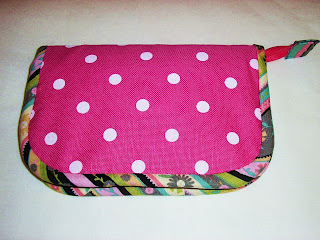 The cutting instructions were a bit confusing I have to say, I didn't quite get the difference between inner panel and lining, even after several read throughs, and I lost track of the various cutting pieces for all of the different pockets. It wasn't helped by the fact that there were several errors in the instructions, I think 7 out of the 15 cutting instructions were incorrect, so even although I had marked the new measurements in the book, it doesn't exactly fill you with confidence that the rest are right, does it? In the end I managed to cut one of the pockets out wrongly, but, fortunately, too large rather than too small. I was also confused as to where each pocket would end up (I am easily confused as you can tell!) and would have changed the placement around if I had worked it out beforehand, but once the pieces were cut that dictated where half of the pockets would end up. That is not the pattern's fault to be fair, but rather a lack of vision on my part! 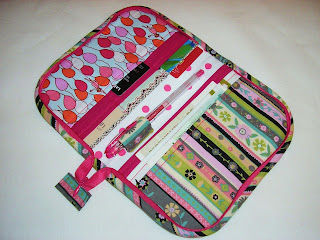 As the various branded types of interfacing are not readily available here, as with other projects I end up guessing and using what I think is the nearest equivalent from what I have to hand. So, I backed the exterior of the organiser with a fusible fleece, and re-inforced the centre with a flexible, firm interfacing, which meant that with all the pocket layers there were a lot of layers to sew by the end. My sewing machine coped manfully, thank goodness, which is more than can be said for me as I managed to sew the end of the zip into the binding! It was only when I was hand sewing the binding at the end that I realised what I had done, see what I mean about a lack of vision!

Despite all of this, or maybe because of it, I was really pleased with the organiser and I am already thinking I might make some more to give as presents to my daughter-in-law and son's girlfriends. I will try to remember the next time, though, to keep the zip out of the way when sewing on the binding :)

In a rare burst of productivity I also tackled this week's Zakka-style SAL project, a tweed pouch. I don't know if it was a reaction to the unending sport but this was also a pink project. I had some lovely bright pink wool fabric that I had bought a while ago to make myself a Fashionista Bag from Lisa Lam's Bag-Making Bible book. Whilst I haven't gotten around to making the bag yet, although it is on my to-do list, I could at least make a pouch to fit in the bag in the meantime. 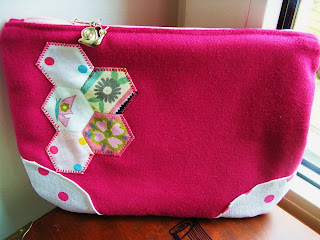 I changed the pattern slightly by using Lisa Lam's method to insert a top zip by adding tabs to the zipper ends, and chose to outline the appliqued hexagons in bright pink rather than the transparent thread recommended. I discovered when I went to unzip the pouch once it was finished that the lining on one side is a tad too close to the zip, so some tugging is required to get past the spot, a lesson learnt for the next time I use the zipper foot!

Just to round off the pinkness of this post, I have been getting more ambitious with the crochet and have purchased these lovely balls of yarn to make a crochet cushion cover. 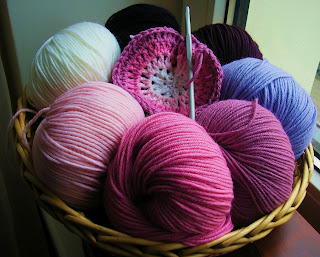 I shall close this post now before you overdose on pink, normal service will be resumed shortly!