A weekend with no travelling and a new month with 2 new BOM's, easy to see where I would be at the weekend. Beforehand though, we had a quick trip to Tallinn to fit in, and to my delight there just happened to be a Craft Fair on in Tallinn Old Town whilst we were there. Time to pack husband off to work and go for a wander! 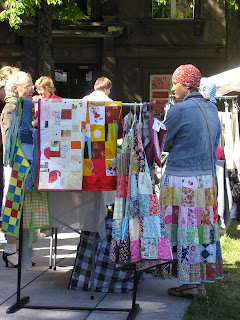 How about this for dedication to patchwork? 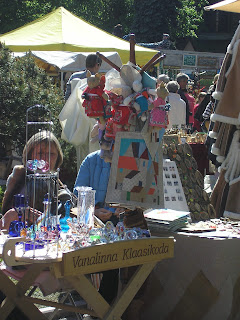 And doesn't that patchwork bag look great? Paper-pieced do you think?

Of the three Baltic Countries, Lithuania, Latvia and Estonia, Estonia is the only one where patchwork and quilting is a recognisable feature of the handicraft culture. Large, tied quilts are sold in several craft shops in the Old Town, and pieced views of the architecture of the Old Town are made up into cushions and bags for sale. Despite this no-one can tell me where to buy wadding! I was very hopeful of the Textile factory I spotted on the way to Tallinn, but a quick stop there on the way home drew a blank. There must be a secret source somewhere, I will just have to keep looking!

Before settling down to watch the amazing but rain-soaked Diamond Jubilee river pageant there was just time to fit in a quick viewing of the May and June Craftsy BOM's. May's blocks were variations of the Log Cabin block and June's are based on HST's. I was surprised to find that the wonky 5-sided Log Cabin block took the most time to put together, and also to find that I enjoyed it the least. I had expected that a block where seam allowances were not crucial would be right up my alley, but actually I much preferred the more orderly Modern Frame Log Cabin block on the left.  I am obviously more orderly minded than I thought I was! 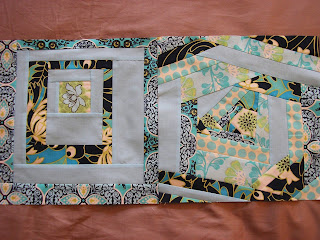 I had forgotten how good it was to get the BOM's out of the way early in the month, so I'm really pleased to have the Craftsy BOM's for June done and dusted already. 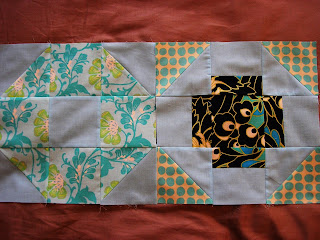 I think there are only 10 BOM's in this quilt as the last two months are dedicated to borders, binding and quilting so I am more than half-way there already, which is more than can be said for the HST BOM from In Color Order, but with no travelling this week, who knows I might even catch up on that one too :)

Don't forget to check out the great blogs this week in the Let's get acquainted Blog Hop organised by Beth at Plum and June. Kristy has posted today a great tutorial for her paper-pieced Red Herring block that was inspired by the gear pedal on her car! Now that is dedication (or something!) and Beth has a great Advice for New Bloggers guest post

Linking up to Sew Modern Monday
Posted by Celtic Thistle at 14:13