Five hours of rugby on the television on Saturday was the perfect excuse to get stuck in to the backlog of blocks I seem to have amassed lately.

First up were the first two blocks of the NY Beauty QAL. I am using a Kona Solid in Hibiscus and a FQ bundle of Kaffe Fassett fabrics for this QAL. Even although these are the first blocks to be done, I am already thinking that I don't have enough fabric! When I read the initial instructions for the blocks the fabric requirements were 10 Fat Eighths of the main fabric and 1 and 1/2 yards of the background fabric, so that is what I bought, but having done the first two blocks (and read the introduction to the QAL again!) I now realise that this yardage is only to make one of each block. 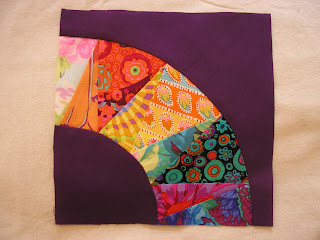 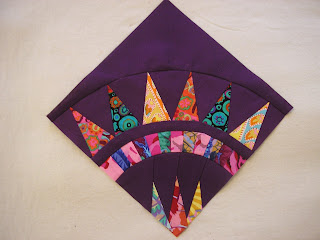 Having seen the photos posted to the QAL Flickr group I think the real beauty of the blocks is only really seen when there are 4 of each joined together. So for the minute I am making one of each block, but I suspect that I will have to go back later to make 3 more of some of them at least.

I really enjoyed the paper piecing of these blocks, I found the rhythm of pin, sew, cut, press quite relaxing, but the curved seams were another business all together! The second of the blocks above came out a good 3/8" smaller than it should have been, which was I think down to a too generous seam allowance on the curved seams. More practice needed I think!

With the backlog of NY Beauty blocks out of the way, the next target on my list was the Craftsy BOM that I have managed to ignore since signing up in January. However, having discovered on Friday that I had won a $25 Fat Quarter Shop gift certificate in Ellison Lane Quilts' Craftsy BOM Giveaway, guilt kicked in and I finally got around to watching the video for the first two blocks, and wondered why I had put off starting this BOM for so long! As I had also promised my son, the recipient of the SH QAL quilt, another, bigger quilt for their bed, this seemed like the ideal time to start another sampler quilt for them.

A quick trip to the factory store and I had my 4 metres of solid fabric in pale turquoise to go with the several metres of Amy Butler Daisy Chain fabric, which I have been hoarding since using them as linings for these bridesmaids bags used at my son's wedding. 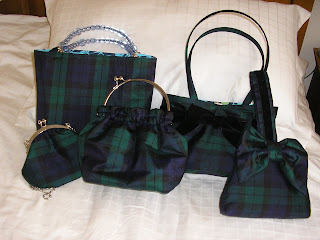 Two blocks down, four more to go to catch up! 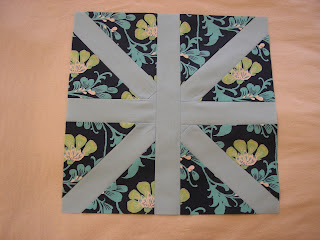 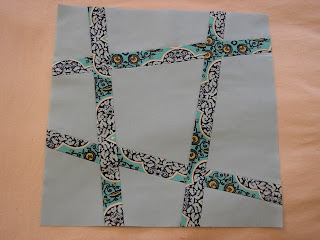 Of course now that I have just finished the Sew Happy QAL, there is a gap to be filled, so naturally I have signed up for another project. This time, though, it is not a Quilt a Long but a Sew a Long for Rashida Coleman-Hale's new Book, Zakka Style hosted by LR Stitched I really enjoyed Rashida's earlier book, I Love Patchwork and had debated whether to buy the Zakka Style book when it was published in the UK, so it only took a minute to decide to sign up for the Sew a Long! There are, apparently, 24 projects in the book and there will be 24 different bloggers hosting the Sew a Long, which starts on April 2nd. I am keeping my fingers crossed that I get the book in time.
Linking up to Sew Happy's Manic Monday Link Party, Canoe Ridge Creations Sew Modern Monday and What a Hoot's BOM's away Monday
Posted by Celtic Thistle at 08:37