Well, we are on the home straight now with the Sew Happy QAL, the second last block and boy, was it a pain in the neck! Nothing to do with Jenna's brilliant video instructions, I hasten to add, but if this had come along earlier in the QAL, I think I would have been running for the hills. I have been struggling with this block for the last two days, and I am glad that it is now finished (and far from perfect, unfortunately!). I think this may prove to be my one and only foray into foundation piecing, in fact, I am sure of it. 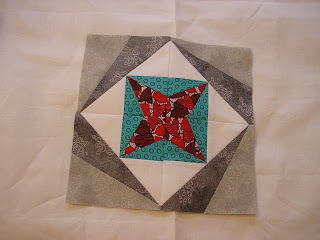 Part of the problems I had were, I think, due to having to use up scraps of some of the fabrics to make up the block, as this was all that is left of the lovely turquoise fabrics that I started with. So some of the seam allowances were, I think the technical term is "scant", or in my case, "very scant". In some cases they were so scant as to be non-existent, so seam ripping was called for and another attempt made. When I measure this block against previously completed blocks it is about 1/2 inch bigger all round, now I know that is better than being smaller, but isn't this kind of piecing supposed to do away with that kind of problem??

Actually, I think that the fabric I used for the foundation might also have contributed to my problems as, although I starched it before using it, I suspect that there was a bit of stretching going on, which all the ripping and re-sewing probably didn't help! That probably accounts too for one square of the centre square being 1/8" too small. Aaargh!!!

I had dithered about whether to paper-piece this block (and am now wishing I had!) because I am enjoying Katy's FPPFTT so much, but decided that the whole point of this QAL was to learn new skills, so ought to try the foundation piecing. Well, all I can say is that I have now tried it and won't be trying it again any time soon!

This week hasn't been all bad though, I have finally finished a cross-stitch towel that I have been working on since the New Year. I only work on it in the evenings in front of the TV, which is why it has taken so long. The pattern, again, was from the book, Made in France, cross stitch and embroidery in red, white and blue by Agnes Delage-Calvet and is rapidly becoming my favourite source of cross stitch and embroidery inspiration. 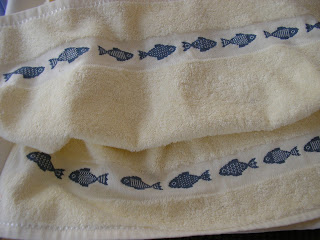 Stitching and watching, or more accurately listening to, the TV is definitely easier when you are only using one colour!

Speaking of fish, I thought you might like to see an example of the fish for sale in the Central Market here in Riga. The market is actually 5 buildings, which were used as aircraft hangers in a previous time, housing a fish market, meat market, vegetable market, bread market and dairy produce market. In the summer the market spills out onto the surrounding area, but only some hardy souls ply their wares outdoors in the winter. 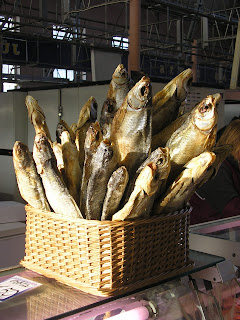 The selection of fresh and smoked fish available in the market is extensive, but these fish have always intrigued me. I have never been brave enough to try them but every smoked fish stall has them so they must be popular!

It doesn't seem like a month since I linked up to Lily's Quilts Small Blog Meet for the first time, but I am delighted to be linking up again. It was lovely to see what other new, and nearly new bloggers were getting up to.
Posted by Celtic Thistle at 08:26

Email ThisBlogThis!Share to TwitterShare to FacebookShare to Pinterest
Labels: cross stitch, Made in France, patchwork, QAL