Catching up at last!

Having finally started on the backlog of blocks for the Craftsy BOM , I am determined to get up-to-date before April arrives. So, you can imagine my delight when I realised that one of the March blocks was a foundation pieced string block, and the block that I have yet to catch up on for Katy's FPPFTT is a paper-pieced string block! Two blocks with one stone, that is my kind of catching up :) True to my resolution to avoid foundation piecing at all costs, the March Craftsy block instantly became a paper-piecing project! 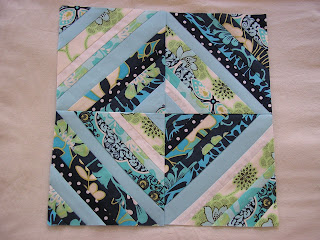 The HST blocks, which were the February blocks, in the BOM were a mixed bag to be honest. Each of the 2 blocks used a different method for creating the HST's. The first, for the Chevron Block, involves drawing diagonal lines on squares and sewing either side of the line to create 2 HST blocks when cut on the line, whilst the 2nd method, for the Balkan Puzzle block, involves sewing all around 2 squares with a 1/4" seam and then cutting the squares twice on the diagonal to create 4 HST blocks. In Color Order's HST BOM also provides these 2 options for creating the HST blocks, but until now I have only ever used the first method, which In Color Order calls the "traditional" method. However, nothing ventured, nothing gained, perhaps now was the time to have a go at the "alternative" method! There have been several comments in the HST BOM about the bias edges created by the alternative method, and although I am not 100% sure that they were the cause of the problems, I have to admit that the Balkan Puzzle block was ripped and re sewn several times before I could get the points matched up in any kind of order! I am obviously a traditionalist at heart :) 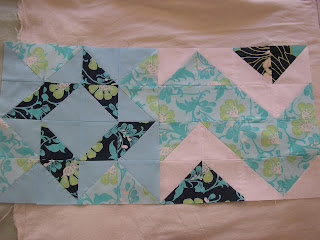 Still, with only the Spider's Web block to go for the Craftsy BOM and the end of the month over a week away, things are looking hopeful for a clean slate to start at the beginning of April. Now, if I can only get this week's NY Beauty Block and FPPFTT block completed this weekend, I will be so up-to-date I won't know myself!


In other catching up, the lovely Claire at Sewing Over Pins kindly passed on a Liebster blog award a couple of weeks ago, and I haven't managed to get my act together sufficiently to a) thank her or b) pass the award on. As you are probably aware the  Liebster award is given to blogs with less than 200 followers and as a recipient of the award I should thank the award blogger in a post, list the names of five blogs I follow who fall within that category who I feel deserve to be noticed, advise the five bloggers by leaving a comment on their blogs and copy and paste the blog award on my blog. Since Claire nominated me for the Liebster award I have been lucky enough to win a giveaway at Ellison Lane Quilts and a Bonus Prize in Sew Happy Geek's QAL, so I am hoping that I am also passing on the luck too!


Amy at the cute life :)  Check out the progress of her Fire and Ice quilt!

Catherine at Knotted Cotton Look for her photos of the cutest tree house doors you will ever see!


Karen at Practically Pippy See if you can help her with her Stale Stash Swap!

Caroline at Quilting in the Cold   A fellow quilter in the frozen north, who is just beginning to thaw out!


Sarah at Silly Banana Sewing A fellow Scot in exile!


Hope you are all having a productive week too. Have a great weekend!
Posted by Celtic Thistle at 12:00