Although I managed to polish of most of my BOM's in the early part of this month, I somehow left my June project for 12 WIP's in 2012  until the last minute. So I have been sneaking in some sewing (and seam ripping) time in the last couple of days to try and get this in before June disappears.

Last year I wanted to make a special bag to have at my son's wedding, and when I saw u-handbag's Big 'n Beautiful Betty pattern I knew that this was it.  Finding the perfect fabric was not quite so easy, the bag had to match my purple outfit and I wanted the fabric to be extra-special. (I actually ended up with 3 outfits to choose from, all purple, but we'll not go into that now!) On a late night internet trawl I found an Alexander Henry fabric that fitted the bill perfectly, but as it was an old line it took some weeks to track down a large enough piece for my bag.

With the pattern and fabric I set to. I have made several purse frame bags from u-handbag kits and patterns so although this was by far the biggest frame purse I had attempted, I didn't think it would be any more difficult than the previous ones. 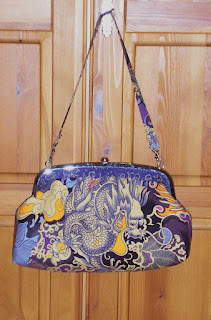 Well that frill along the top gave me all sorts of grief! I have always struggled a bit with the final stage of gluing the bag into the frame, but with a frill to complicate matters it took even longer, so that it was not finished in time :( As you can see, I did finish the bag, but after the first use I noticed that the frame and the bag were beginning to part company, so put the whole thing away resolving to sort it out sometime.

Well that time was this month, sorting out this bag was one of my 12 WIP's for 2012 and I hoped, the only one that I could feasibly finish in time for the looming end of June. So, I set to with scissors and brute strength to wrestle the bag from the remainder of the frame, no easy task given that the point of the glue is that it will withstand the very thing I was trying to do! 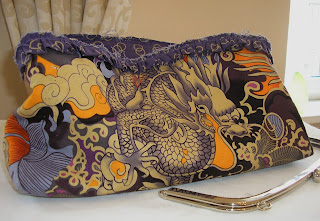 After a lot of tugging and pulling I managed to separate them both, where I discovered that my original gluing had been less than even, which was I suspect the reason that I had problems in the first place. So with the bag deconstructed I set about recycling the fabric to create another bag, using my favourite Kyoko Frilled Pouch pattern from u-handbag. Most of the fabric in the new bag was recycled from the old, except for the exterior bag base, which needed a small piece of the leftover fabric from the original bag. 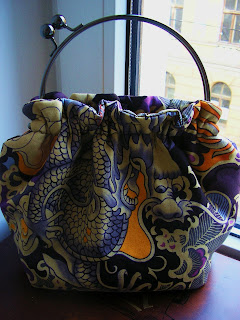 Now that the bag is completed and (fingers crossed!) unlikely to fall apart, all I need is another wedding to go to :)

Unlike large parts of the UK, the weather here in Riga would be ideal for a wedding and there would be no shortage of flowers as these stalls at the Central Market show. 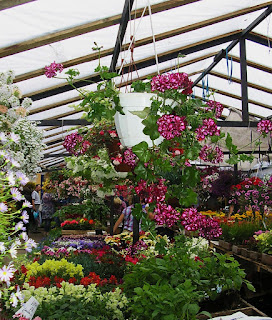 If we only had somewhere to put them we would be investing heavily in these hanging baskets and potted plants! 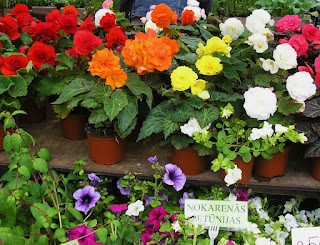 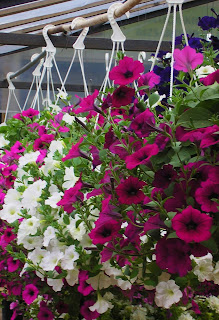 Another finish to tick off the list by the skin of my teeth! I shall definitely try not to leave it to the last minute next month.

New comments are not allowed.