A quilting we will go!

Yay! I have finally got to the stage of quilting my Quilt Group Sampler quilt. I am only about 3 months behind everyone else, but we will gloss over that for now :)

We are using Quilt As You Go for this quilt, which is also the technique used in my first ever quilt class several years ago. If I tell you that I have 24 blocks backed, basted and nearly all quilted sitting in my cupboard from that class you will understand why I am rather hesitant about this whole process. Part of the reason that those blocks have gathered dust for so long is because I have never got around to finishing the last block, a folded star block. So if I also tell you that I am not happy with the Stained Glass window block that I made for the Quilt Group Sampler and intend to redo it, you can probably see where history might be repeating itself!

However, I am heading off to QG today so with any luck that Stained Glass window block will be redone to my satisfaction and we might actually see a finished quilt in the not too distant future. Don't hold your breath while you are waiting though :) 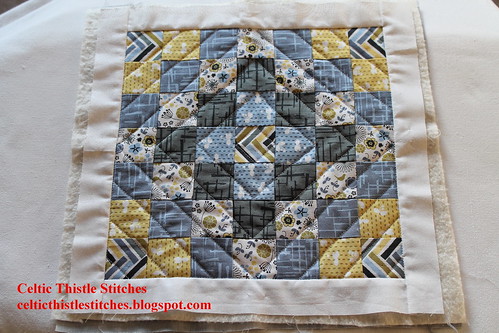 First up and a chance to have a go with the walking foot on the Bernina, this Trip Around the World block, which went surprisingly well. 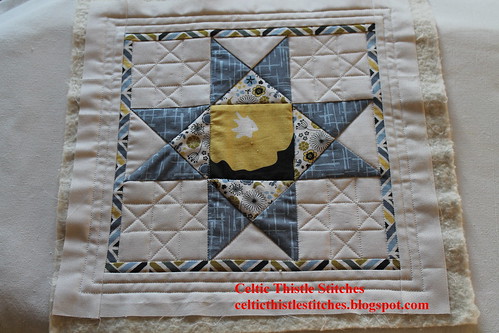 Next up, this Ohio Star Block and a chance to see if the lights on the Bernina are as good as they claim. I used a Hera Marker to mark out the lines for the star quilting and I normally have real trouble seeing the marked lines under the sewing machine lights, but I am pleased to say that the Bernina lights lived up to the claims and I could see the lines no problem! 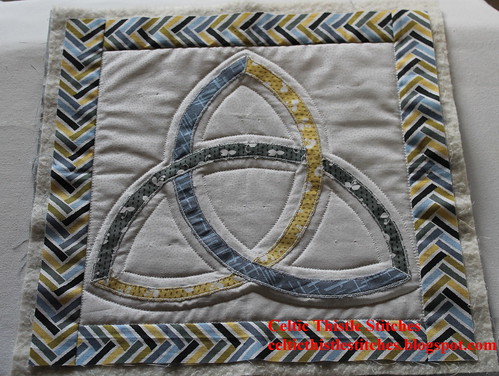 Finally, the Celtic Knotwork block, which didn't originally have a border but quickly had one added when I sliced down the wrong side of the block when squaring up! I used the stitch in the ditch foot to quilt around the border, but I definitely need to practise more with that. It seemed that the ditch guide and the needle were not exactly in alignment as the stitching was noticeable even although the ditch guide hugged the seams. Perhaps another read of the manual is called for :)

So, three down six more to go and then I have to tangle with QAYG sashing!