Confessions of a (bad) Bee

One of the joys of blogging for me is to connect with like-minded individuals around the world and having the opportunity to take part in online Bees is an added bonus. The first Bee that I signed up for, in my early days of blogging, was the Star of Africa Bee set up by May. The Bee was inspired by a board game and included quilters from all the corners of the globe. At the time the Bee was set up I was living in Latvia so was very glad of the chance to spend time with other quilters even if it was only virtual.

The blocks requested by my fellow Bee members were always challenging as I strived to represent themes such as home for Sana or a postcard for Leanne so as the Bee went on the timescales definitely slipped. Eventually though I had only one block left to make to complete my Bee commitment. Irene in Guatemala asked for a block on the theme of music, and this is what I finally came up with for her. 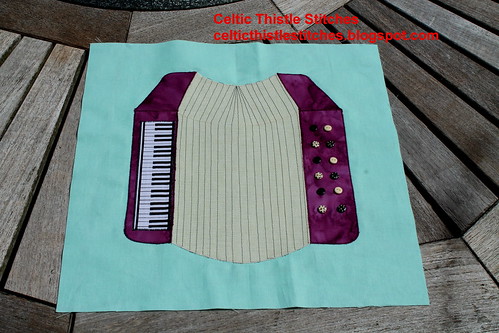 When I was very young (a very long time ago!) one of my great-uncles played the accordion and no family gathering was complete without at least one or two tunes from the old squeezebox. so that is what I ultimately decided to depict in my block.

As for the confession of the title, well I am thoroughly ashamed to admit that this block is one year, that's right one year late! My guilt is assuaged a little by the fact that I am still waiting for several blocks from the Bee and it was my turn to receive them nearly 18 months ago! Most of that time I have to say was taken up with actually trying to decide what to make for the theme, the actual making itself once I had decided upon the accordion didn't take that long.

So, I am wondering what is the longest time period that you have waited to receive or send a Bee block? I am hoping that I am not the only one who is this tardy, but perhaps I am. When do you decide to cut your losses and give up on receiving a block or swap? In my first ever swap I never received the swap despite being promised not once but twice that a swap angel would be stepping in to replace my negligent swap partner. It certainly made me more wary of swaps ever since.

I cannot claim to be entirely innocent of negligence though. I totally misread the instructions for the Siblings Together Quilt Bee ,that I joined this summer, and discovered too late that I was supposed to be making 4 blocks for Jo in June to kick off the new Bee year. As Jo wanted to take the finished quilt top to the Fat Quarterly Retreat in July and I was in France without access to the block instructions (or any suitable fabric!) the quilt top was completed thanks to extra blocks from Jo without any input from me.

Thankfully, not all of my Bee activity has been so shameful this last month.  I have completed my first ever granny square block for Hannah in the Fat Stash Brit Bee, 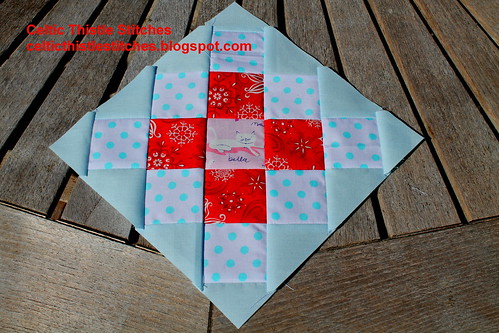 As well as this Liberty Cat block to add to her quilt for her cat-loving friend. 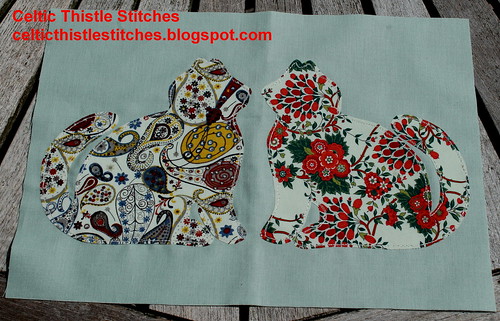 Then in a burst of Bee activity I finished Ashleigh's blocks for August in the same Bee. 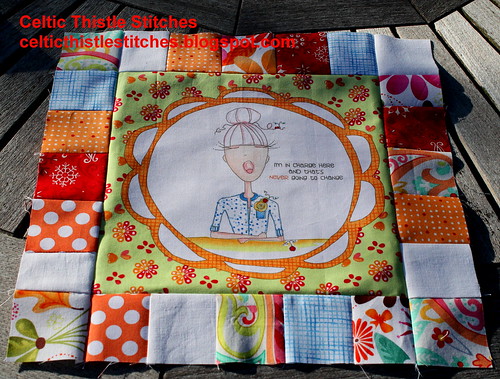 Ashleigh sent us the panel in the centre of the block and some matching fabric and asked us to make up blocks from them. So I added a border of 2.5" squares around the panel, mixing in fabrics from my stash. 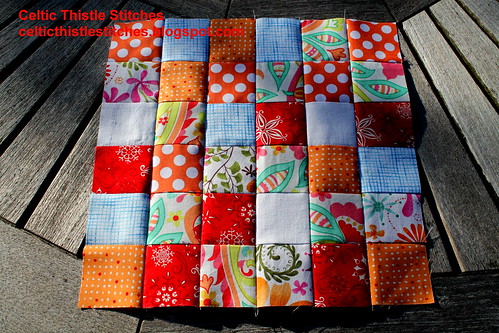 Then as I had managed to get a bit carried away with cutting the 2.5" squares I was able to make a second block to pop in the post with the first.

Although I mucked up entirely the first month of the Siblings Together Quilt Bee in June, I have managed to redeem myself a bit by completing the Snowball blocks for July in time for Jane 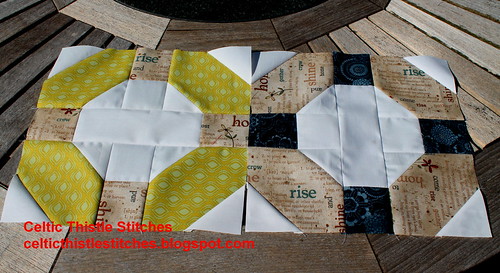 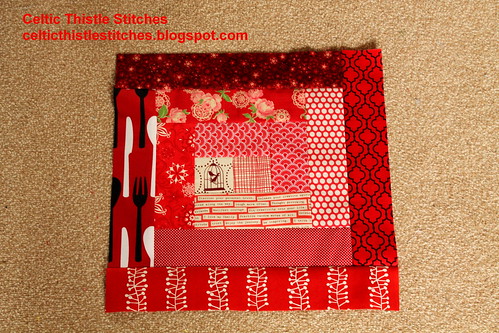 And the log cabin block for Sue for August, so fingers crossed that I will manage to keep to the timetable from here on in!

Now I feel a lot better for getting those confessions off of my chest :)