After my enjoyment of the first instalment of Katy's Foundation Paper Piecing for the Terrified FPPFTT I was definitely looking forward to the second tutorial, especially as it would come one day before the long-dreaded foundation pieced block in the Sew Happy QAL! This time we were practising triangles so more capacity for disaster I would have thought! In the end, the block turned out better than I had anticipated, which is always nice. 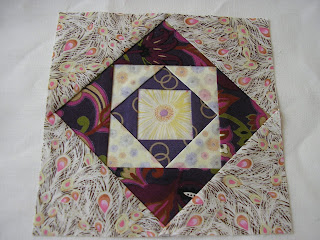 I hadn't been overly keen on the fabric combination when I had pulled them from my stash, but was keen to get on so had gone with them. They definitely came together better than I had expected, so I was very pleased. Now I just need to decide what to do with the block and whether to do more of the same to give me more options. All suggestions gratefully received! My son and his girlfriend have decorated their bedroom in purple, so I could maybe do something for them.

It wasn't entirely plain sailing with this block as I did find that I was being a bit too generous at times with the seam allowances. I found it more difficult to judge with the triangles than I had with the strips for the first block, but, hopefully, that is something that will improve with practise. Let's hope so as Jenna's next block in the Sew Happy QAL is a star full of foundation pieced triangles, and I can't afford to mess it up as I haven't got much fabric left!

There has been a great incentive to be indoors sewing these last couple of days here. Just when the temperature rose above freezing for a couple of days and it seemed that the winter might be over, this is what we looked out on yesterday! 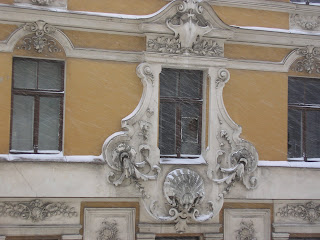 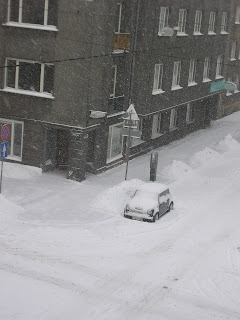 So as well as getting to grips with the paper-pieced triangles, I also got around to starting the teatime lap quilt that I have been planning for several weeks after the discovery of a forgotten, embroidered linen in my cupboard. The borders are on to square up the linen and I am busy working out the maths for the first row of blocks. This may take some time as I am always forgetting or miscalculating the seam allowances, if only someone had been able to tell me at school how important maths would be I might have paid more attention :) 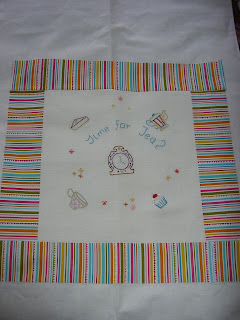 I really like the stripe fabric for this border, it picks up the embroidery colours really well. I am finding the linen centre very contrary to work with, trying to get the edges square has been difficult to say the least. Hopefully, now that the cotton border is on it will be a bit easier. I have a pattern for an Irish welcome quilt that I would really like to do, but it has a linen centre too so will no doubt have the same problems. I will see how this one turns out before tackling any more linen I think.


Here is how my WIP list is looking at the moment;

Ongoing
Waiting
Oh dear, nothing has moved on the Waiting list! I will definitely have to try and find the time to at least have a look at the Craftsy BOM as the March tutorials will be out tomorrow.


Linking up to Lee's WIP Wednesday and Esther's WOW
Posted by Celtic Thistle at 08:33