Never having tried paper-piecing before I was very surprised to find that I loved tackling the first block in The Littlest Thistle's FPPFTT. I loved it so much that I didn't stop at one block, but got a bit carried away and made 4! 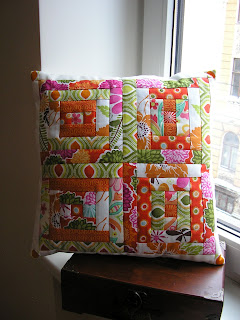 Joined together and bordered with a linen strip, the 4 blocks became the orange in my rainbow cushions. Four cushions down and three to go and two results in one! 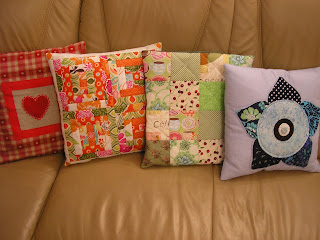 I really loved this fabric, Terrain by Kate Spain, so livened up the back of the cushion with some self-covered buttons too. 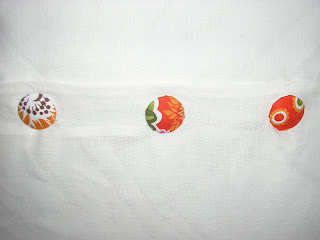 The next block in the FPPFTT is due out today. Katy gave us a preview on her blog at the weekend, so I am really looking forward to getting to grips with triangles this time. In fact, I have enjoyed the paper piecing so much that I have signed up for the New York beauty QAL too! I am nothing if not enthusiastic :) Check out the giveaway at Freshly Pieced to celebrate the beginning of the QAL here

Talking of Quilt a Longs, the Sew Happy QAL is steadily coming towards the end. This week's block was number 10 of 12, the time seems to have flown by on this, which I really didn't expect when I signed up. This week's block was all HST's, and came together really quickly. The next block is a paper-pieced block, so I am glad that I will already have had some practice before attempting it. I am beginning to worry about running out of fabric for the last couple of blocks, so can't afford to make any mistakes now! 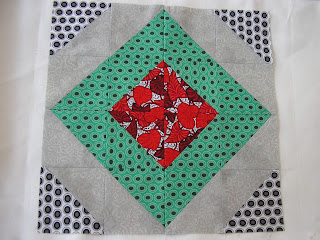 The finished quilt will be a (late) First Wedding Anniversary present for my son and daughter-in-law. It was their Anniversary yesterday, which they celebrated with a weekend in Florence. As we had snow again on Sunday I know who was in the right place. The quilt will be a few weeks late but I am sure they will forgive me!
Posted by Celtic Thistle at 08:52