Well, I shall have to be more careful what I wish for, having said that more snow would be handy for sewing over the weekend, we had snow all day on Sunday! Unfortunately, the temperature rose this morning so walking along is a dangerous pastime both underfoot and overhead, where large folds of snow wait to fall from the roofs onto the unwary.

Snow wasn't the only weather we experienced this weekend, there was definitely a strange alignment of stars and moons on Saturday. I finally got down to basting the (almost) Irish Chain quilt and what a job that was! My knees are still recovering from the hours spent crawling over a wooden floor. 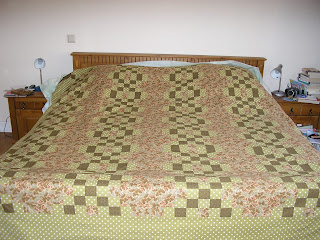 As you can see this has turned out to be a rather large quilt! So large, in fact, that there was nowhere big enough in the apartment to lay the whole quilt out flat, so the basting had to be done in two halves. Not ideal, I know, but nothing else for it. Never having basted such a large quilt before I was a bit worried about the whole process, with just cause as it turns out as it was hard work trying to keep everything flat.

I also was using for the first time my new toy, a Microstitch basting gun! 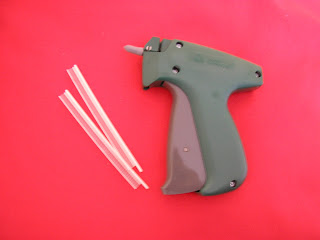 Isn't it neat, and look how tiny these tacks are! I bought this a while ago specifically to baste this quilt but had never used it before Saturday. I am now a fan, the tacks as you can see are tiny so equivalent to pinning but the process of stapling them is much faster than pinning, for me anyway. I was, initially, a bit worried that the stapling action might mark the wooden floor, but had no problems with that at all. As this quilt will have to be basted for a considerable time, and probably moved whilst still basted, I think that the tacks are probably also much less likely to be accidentally removed than pins might be. Well that is what I am hoping anyway.

Now that this is basted I, in my head at least, feel that it has moved from being a UFO to a WIP!

My question to you all though is how to quilt this? Is it possible, or practical even, to machine quilt something this size on a domestic sewing machine? If so, how do you manhandle the quilt through the machine? Is the only option really to hand quilt this and again how do you cope with the sheer volume of the quilt? So many questions, you can tell I am a bit daunted by this quilt, but now determined to get to grips with it.

Today I am looking forward to my first paper piecing lesson from The Littlest Thistle , which after my efforts at the weekend will seem like working in miniature. New York Beauty here we come!!