On our recent visit to Prague, whilst searching for a Post Office we wandered into a rather large building expecting to find Post Office counters and mail boxes. Instead we found this! 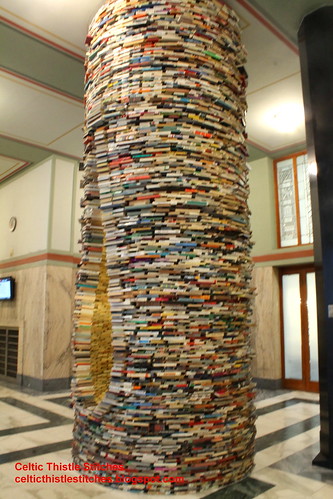 As soon as we were close enough to see that this was made of books we realised that we had wandered into the library by mistake!

This book tower was amazing, it ran the full height of the building, which was at least three storeys high. This photo was taken on the first floor so peeping through the gap in the front you could see right down to the basement or right up to the top floor.

We eventually found the Post Office around the corner :) 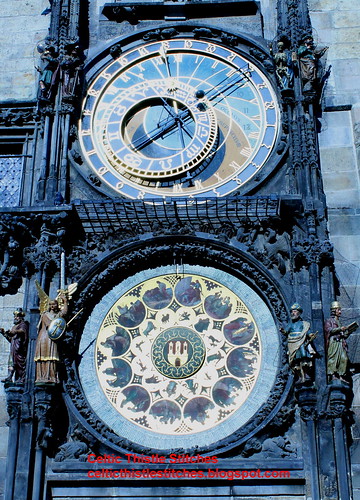 This is the Town Hall clock in the Old Town Square in Prague, isn't it glorious?

The mechanism for this clock dates from between 1552 and 1572, which is pretty mind-blowing too.

The bottom dial, which was replaced in 1866, represents a calendar with peasant scenes to illustrate the months of the year. 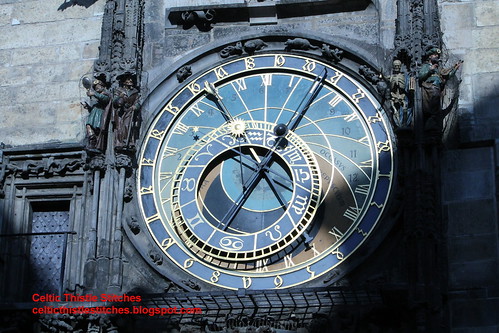 The top dial, seen here in close-up, has a wealth of information on it. The hand with the sun on it records three different times, the outer ring for Old Bohemian time (of use only to Old Bohemians!), the Roman Numerals inside that ring records current time, the blue part inside the Roman Numerals represents daylight hours, which vary from summer to winter. The inner ring shows the movement of the sun and moon through the 12 signs of the zodiac. It makes digital clocks look exceedingly boring!

As well as all of the above to take in, there is a floorshow to be seen on the hour :) The two figures on the right hand side of the clock are Death (the skeleton) and the Turk. At each hour Death pulls on the rope in his hand and inverts the hourglass in his hand, the Turk shakes his head from side to side. Vanity, on the left hand side, meanwhile is gazing at himself in the mirror next to his friend Greed.

But that is not all! 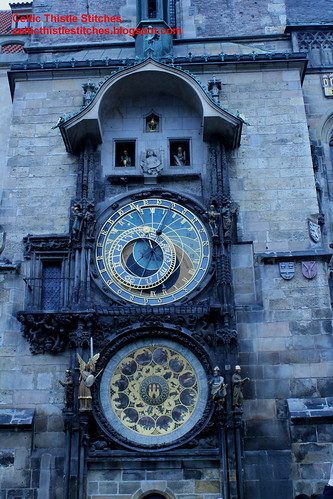 Above the dials the windows open and a procession of the Twelve Apostles pass by peering out of the open windows in turn.

Needless to say it is not difficult to tell when an hour approaches if you are anywhere near the vicinity of the clock. The whole show is over in a flash, but is definitely worth the wait. 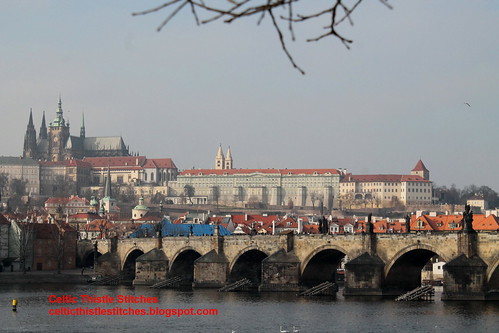 Although buildings such as the Charles Bridge and Prague Castle above are how most people think of the city, there is a modern side to this beautiful city too.

Nowhere is this better epitomised than in the aptly named Dancing House. 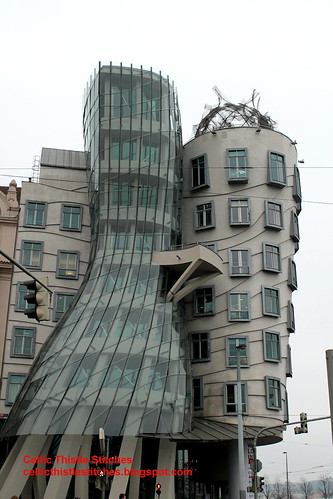 The building was completed in 1996, and was not universally popular at the time of its' construction, but now is as much of a landmark as its' Baroque and Art Nouveau neighbours. It is even more fun when lit up at night, but we didn't get a chance to see that. Maybe next time :)