When our youngest son moved last September to a new (and draughty) flat for his last year in University, I made him a draught excluder for the back door to keep out the cold Edinburgh winds. 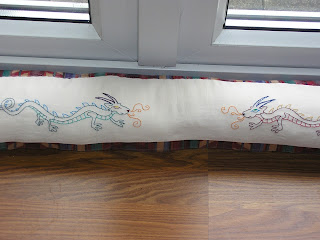 I also promised him a fabric door stop, and, indeed, set to on cutting up an old pair of jeans many months ago. Well, he graduated last week, so the door stop is no longer needed, but I got round to finishing it all the same! 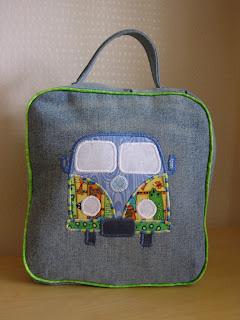 The pattern and instructions came from an early issue of the Simply Homemade magazine. It is the first time I have attempted satin stitch outlining for applique and some of those tiny shapes like the wheels and side view mirrors were hard going!
The instructions say to fill the door stop with 1Kg of rice but I am not so sure about that, have you ever used rice as a stuffing, is it suitable? 1Kg of rice only fills up less than half of the door stop, so I have stuffed the rest with the innards of an old cushion to fill it out a bit more, but I am not convinced that this is the best way to fill this. All suggestions gratefully received!

I was pretty pleased with the piping as with the denim and piping there were several layers to get through in the last round of sewing. I was a bit nervous turning it out in case I had managed to miss anywhere, but thankfully it all seems to be fine!

As it is no longer needed as a door stop this will be my entry in to the Crafter's Apprentice Something Old Something New competition, whilst I think of somewhere to use it.

One of the joys of being back in the UK is the opportunity to visit fabric stores in person, so when I discovered that our local John Lewis store had a sale on, I knew which department I would be making a beeline for on my next trip into town. Joel Dewberry fabrics half-price - yes, please! 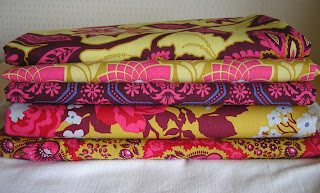 I have no idea what I will do with them but on a grey day they were too bright and cheerful to resist!

In another piece of good fortune I discovered today that Sarah of Silly Banana Sewing pulled my name out of the hat in her recent giveaway, so a charm pack of Make Life by Sweetwater for Moda is winging its way to me too! I have just discovered the joys of charm packs, so I am really looking forward to using it. Thanks Sarah!

Linking up to Sew Modern Monday, and Manic Monday
Posted by Celtic Thistle at 00:15