I have had a Reverse Applique project on the go for ages, it has been taken apart and re-done at least three times.

First of all the patchwork back for the applique didn't fit the applique outline, so needed to be reworked to fit the frame. Then, I really struggled to turn under some of the allowances on certain parts of the design. All in all it has been a complete pain in the proverbial, but I am delighted to say that I have finally completed the Reverse Applique! 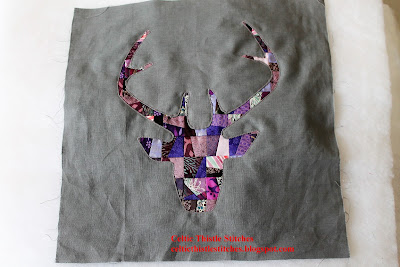 You will not be surprised to know that the antlers were where I really struggled to turn under the allowance. I discovered when I compared this to the magazine photo that the antlers on my version are a lot narrower than in the pattern version. I do remember taking the pattern to be enlarged at a local printers (don't you just hate patterns that need to be enlarged!) and have a vague memory of having to compromise on the final size, so that presumably accounts for the difference. 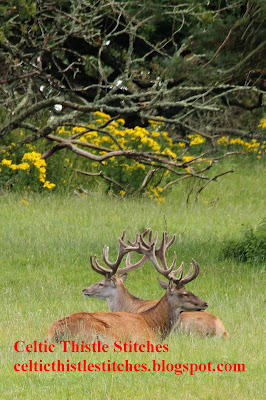 Having seen these magnificent beasts on a recent visit to a Deer Park, I think the antlers in the version above are pretty accurate though, don't you?

I did not help myself by picking a linen blend fabric for the top fabric, as it was fraying where the applique points are narrow before I had even got to stitching it down! 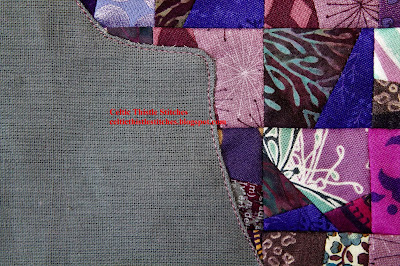 So, I went for a belt and braces approach by hand stitching the turned applique and then machine topstitching. Next up an application of Fraycheck to be sure, to be sure :)

The piece will become a cushion eventually when I have sourced some Deer Horn buttons for the back!