Part of the joy of belonging to a Guild is the opportunity to meet and be inspired by luminaries in the particular field. At a recent meeting of my local EG guild I was lucky enough to see and hear from the creative powerhouse that is Jilli Blackwood 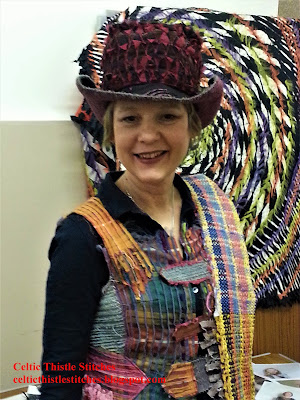 Jilli is a weaver and embroiderer who works on a stunningly large scale producing the most amazing pieces and, as you can see, is also a walking advert for her work :)

Throughout Jilli's talk to our group her passion for her craft was abundantly clear and it was fascinating to hear and see examples of such a talented artist's work. Jilli was the creative brains behind the uniforms worn by Scottish athletes at the 2014 Commonwealth Games. 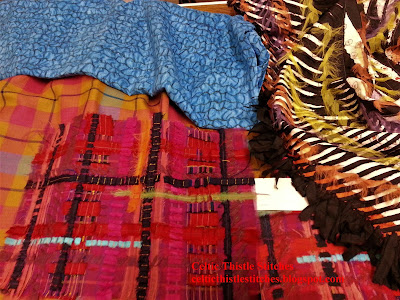 You can see the fabric designed by Jilli for the shirts and dresses (blue) and kilts and sashes (gold tartan) in the photo above. The blue fabric looks as if it is stitched but is, in fact, a digital print as is the tartan. To see how the fabrics looked in use check out this video clip

Jilli has christened her particular style "Slash and Show" and there were quickly indrawn breaths in the room a couple of times, when she would casually mention cutting pieces up the middle when she felt they weren't working. Pieces that had been worked on for a considerably long time I should add, hence the gasps! Indeed the outfit Jilli is wearing in the photo above had been subjected to some of that treatment during its' production and was most definitely none the worse for it. 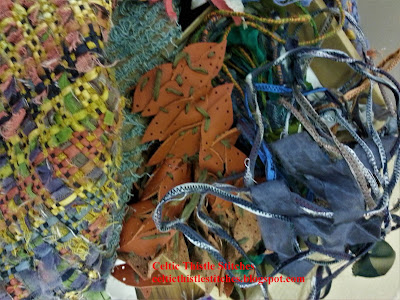 Wearable art was a recurring theme during the talk and at one stage Jilli casually draped the stitched leaves above across her shoulder to great effect. I am sure that I was not alone in wondering how something so simple to look at became almost liquid in its movement by simple repositioning.

Every single stitcher attending the talk came away with a renewed energy for their craft and a heightened respect and admiration for the brave practitioners, like Jilli, who pour their heart and souls into their work regardless of the personal cost to their own health.

If you ever get a chance to attend a talk or demonstration by Jilli Blackwood, I sincerely hope that you will take it as I can assure you that you will not be disappointed.