Last month the Pleasant Home Blog's theme for January was using up your scraps and there were some wonderful projects showcased. Although I have not been sewing long enough to have built up enough scraps to consider some of the marvellous quilts shown, like probably all quilters I do hang onto leftover fabrics from my projects, no matter how small, in the belief that they will come in useful for something!


So, inspired by the many projects I have been looking at in the last month, I decided that it was time to "liberate" some fabrics from the scrap bag, and realise their potential :) I spent a pleasant hour going through the scraps, remembering the original projects and trying to image new ones. To my delight I came across an "orphan block" from the very first quilt I made, which was for my eldest son, who was living in Madrid at the time and complaining of the coldness of the winter nights. As I also had some fabric left over from the original quilt too, I realised that there was scope for a new project using the block and fabric scraps.

Sitting next to the scrap bag in my craft cupboard, is the evidence of my infrequent forays into the world of knitting. My nice new knitting needles are jumbled together in a magazine file so it is not easy to find the right size or even a pair when I need them. Something needed to be done, and here is the something! 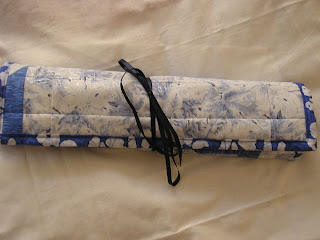 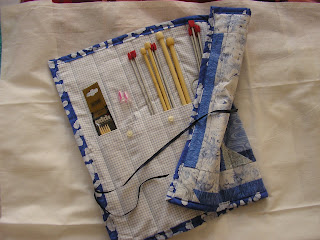 A shiny, new knitting needle roll made from the "orphan block" and leftover fabric, and lined with fabric cut from yet another of my husband's discarded shirts! They are coming in very useful these shirts of his :) My knitting needles have never been this organised. The needle roll measures roughly 22" wide by 17" high, with an inner pocket approximately half the height. I quilted channels of various widths from the top to the bottom of the roll before binding and adding a ribbon tie. I even discovered that I have purchased two pairs of needles the exact same size, but now that I am so organised I won't be making that mistake again.


By now I was on a roll (apologies for the pun!). Until now my knitting UFO's have resided in the brown paper bag that they were originally brought home in, but it is all too easy to ignore them in brown paper, so if they are ever going to be finished it was time to house them in something a bit more inspiring too. Last year I had made a couple of bags from jeans that were being discarded by my son (I seem to have become a bit of a magpie with my family's clothing!), from the bucket bag pattern by Lisa Lam available here. So I dug one of those out of the cupboard too and, voila, a new knitting bag and needle roll for no cost apart from time, and time spent sewing is never a bad thing. 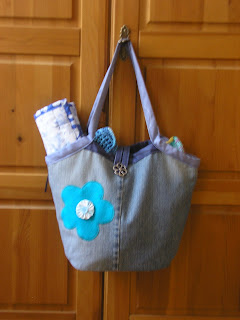 Although we did venture out this weekend, it was not for long as we have found that when you can't feel your chin, it is time to head back indoors. So I had plenty of opportunity to catch up with the February block of the month at In Color Order's HST BOM, which this month is a Flying Geese block. I have always thought that these were beyond me, but having just finished the Flying Geese block for the Sew Happy QAL, I was feeling much more positive towards them, so set to work and finished that too. 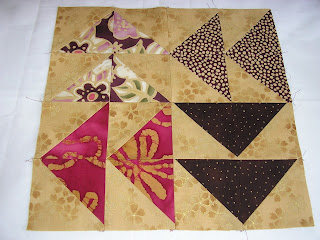 We spent a glorious day last Autumn/Fall in the SW of France listening to the honking of flocks of geese and watching as they flew south overhead, and making this block conjured up those memories. Maybe one day I'll make a quilt from this block to keep that memory!

Linking in to Little Quilt Monday at a pieceful life
Posted by Celtic Thistle at 12:40