We have been on a road trip, driving from Riga to SW France and back so I have a lot of catching up to do. Although most of our trip was on the main roads we did take a couple of detours to have a break from service station food!

Our route took us through Poland, Germany and France and here are some examples of the places we have been. 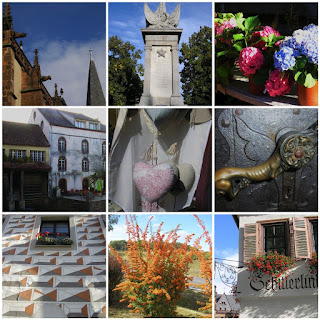 Check out the patterns on that German town house, do you think a quilter might live there? If not, they definitely should.

Naturally I took some sewing along with me. My day on the Travelling Pic Stitch Blog Hop is fast approaching so I needed to get in some English Paper Piecing practice. Basting is easy but I discovered that bumpy roads and careful sewing are not a good mix. Still it is nice after a long day on the road to have this little pile to show for it. 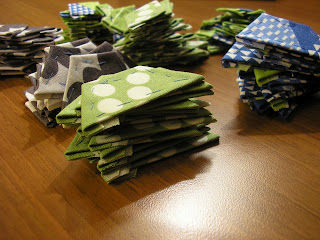 They should keep me busy for a few more days.

As a break from the stitching I also took along some buttons to have a go at making a necklace in the August issue of Beads and Beyond. The necklace design was based upon the eye of a peacock feather but I adapted it slightly as I had found some Mondrian-inspired buttons that I wanted to use. 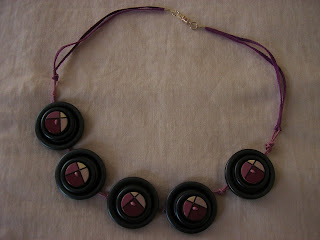 The necklace is really simple to make as the buttons are threaded and then knotted onto the cord. This pink necklace was my first attempt and not bad even if I do say so myself :) I found when wearing it though that the buttons were rather too big as they tended to fall forward rather than lie flat. So I had another go with smaller buttons. 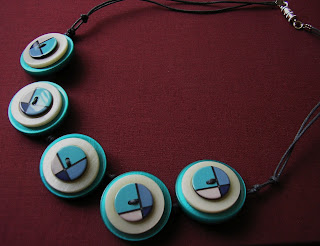 This is a much better size. I think too, because the large buttons are flat rather than with a lip like the black buttons above that makes it lie flatter too.

My daughter-in-law admired these buttons when I bought them, so with her birthday coming up next month I think they may just find themselves heading her way!

Now I am off to catch up on all the happenings in Blog land that I have missed :)

Linking up to TNT Thursday