A Russian feast for the eyes

When we travelled around the Baltics during our stint there one of my favourite occupations was visiting the Russian Orthodox Church in any town we visited. They were always so colourful inside and out.  On a sunny day the golden-domed churches were especially dazzling!

So, as you can imagine, I was really looking forward to having the opportunity to see some particularly stunning examples on our recent trip to Russia. I wasn't disappointed!

Here are some of the highlights : 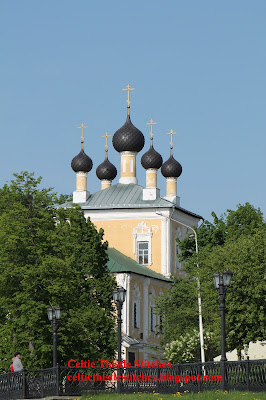 This rather sombre, black-domed church is in a town called Uglich, which was our first port of call after leaving Moscow. 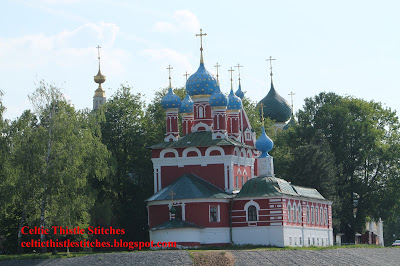 This much more flamboyant blue-domed church, the splendidly named Church of Dimitry of the Spilled Blood, is, however, the main reason for visiting Uglich. The Dimitry in question was the son of Czar Ivan the Terrible, who didn't have the best of luck with his offspring. He killed his eldest son and heir himself during an argument by hitting him over the head with a staff, Dimitry's throat was cut when he was ten and another child fell in the river and drowned whilst very young. Mind you Ivan had six wives so he was doing his best to keep the line going despite the misfortune befalling several of his children :) It didn't work though, as his eventual heir wasn't up to the task and was the last of the line! 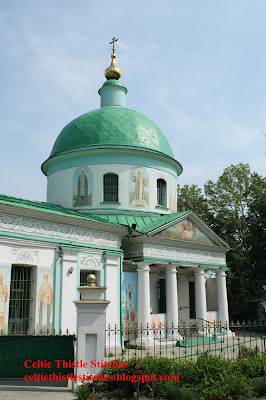 The Churches in Uglich both had the most common onion-style dome but this church overlooking Moscow has the older, less common helmet shaped dome. 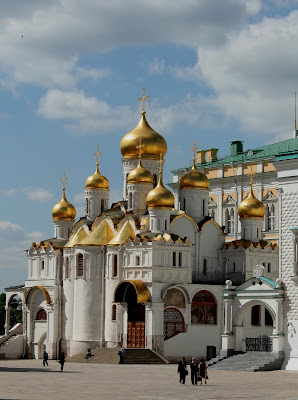 These fabulous, golden domes are on one of the three Churches situated within  the grounds of the Kremlin in Moscow. Each church was apparently either for hatching, matching or dispatching the Czars! 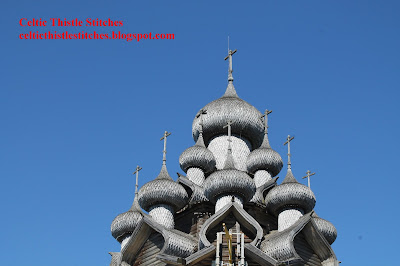 These silver domes are actually wooden and apparently can also look green or gold depending upon the way that the light is hitting them. They are the top of a beautiful wooden church that is currently being restored on the island of Kizhi. 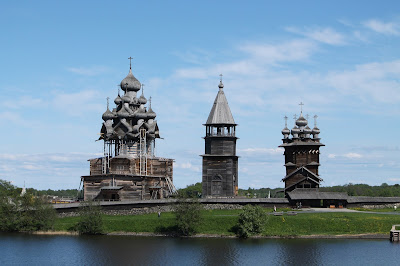 You can see where the Church is being restored better here. The island is now an open-air ethnographic museum and other wooden structures have now been brought there for preservation.

Of course I couldn't finish this post without including a mention for the most outrageously over the top Churches of them all :) 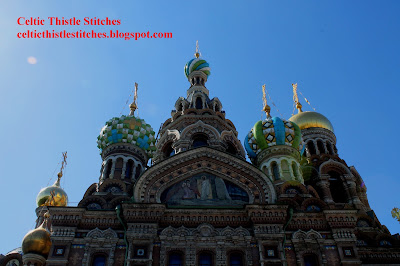 The Church of the Saviour on Spilled Blood in St Petersburg, a riot of blue, yellow and green tiles 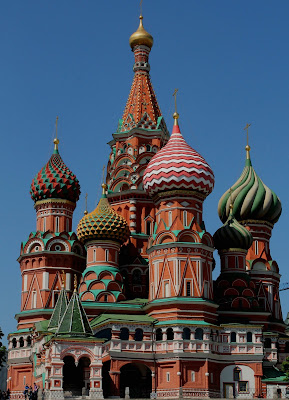 and St Basil's Cathedral in Moscow.

Aren't they just the most riotous collection of colours you will ever see, and a feast of quilting inspiration to boot :)