What's a Kelpie you may ask? Well, you might have already heard of the most famous Kelpie, Nessie the Loch Ness Monster, as a Kelpie is the name given in Scots to a shape-shifting water horse. Now, however, Nessie has a couple of serious rivals for her crown.

Just along from the Falkirk Wheel you will find these amazing structures! 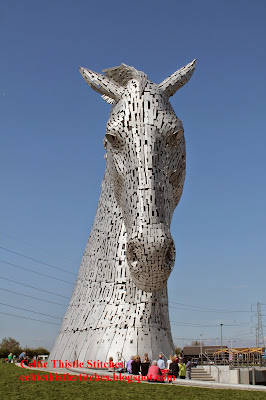 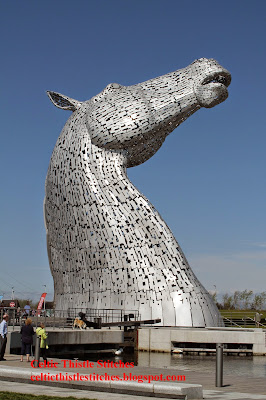 Each of these Kelpies stands at 30 metres tall and weighs over 300 tons, so there would be no mistaking them on a misty evening, and unlike the sightings of Nessie there is definitely no chance of them being likened to a floating log in a photo :)

The structures were erected in 90 days in 2013, and were designed to both reflect the industrial heritage of the area, with their steel construction and the commercial past of the draught horses of the  canals, where they are based. I have to admit that their unveiling in early 2014 passed me by and I only became aware of them in a recent TV programme of a canal journey across Central Scotland. They are absolutely stunning though, so if you ever get the chance to go see them then I definitely recommend that you go! 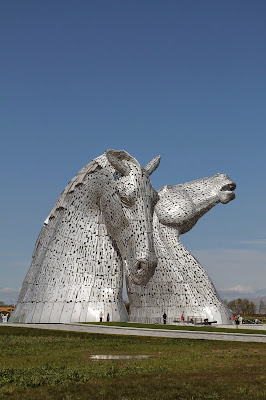 I have to confess to taking rather a lot of photographs of The Kelpies as I just found them fascinating! The photo below is a particular favourite, and you can see more clearly in it, the steel plates which formed the construction of each Kelpie. 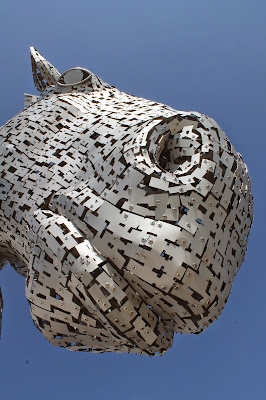