The absence of Zakka SAL-related projects in the last couple of months might have led you to believe that I had well and truly fallen off that bandwagon. I would have been inclined to agree with you, until I saw this week's project - the Garland message board. Having already bought dinky pegs with this project in mind and seeing reports from Fiona  and Wendy that it would only take a couple of hours of my time, it seemed a shame not to have a go!

The original project was designed as a sort of shopping list organiser, but my shopping lists are generally way too long to be contained by a few pegs! So I tweaked the board a little to have the bunting spell out a welcome message. 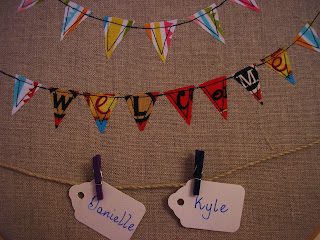 Our son and daughter-in-law are coming out to visit tomorrow, so they have the honour of being the first names attached. 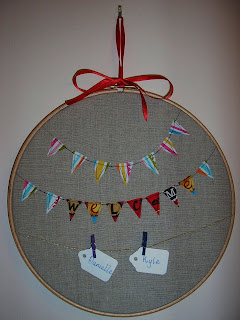 And here it is hanging in the guest room ready for their visit.

The reports were true, it is a really quick project and would, I think, be a nice gift for a new house or baby maybe with the appropriate letters in the bunting. I have missed my Zakka moments (although I haven't missed checking for all the mistakes in the book!), so it was nice to get back into that groove. This is the second last project in the book so being back in the groove will be a short-lived experience. This is the 9th of 24 projects from the book that I have completed, and there are still a couple that I will get around to it at some stage. I don't think I have ever completed that many projects from a single book before, so although I haven't managed all of the projects the SAL has definitely been worth it for me, in terms of getting value out of my book purchase. At times the project a week schedule has been impossible to stick to, but I would definitely join another book SAL in the future, what about you?


Asides from Zakkaing ( the spell checker does not like my new word!) I have also been sewing up and sending Bee blocks before we take on the role of tour guide for our son and daughter-in-law. First up, the Sunday Morning Quilts Bee block colour for September is red, and with my new colour-coded, zip lock scrap system (thanks all for the suggestion!) sorting out the scraps for each block takes no time. 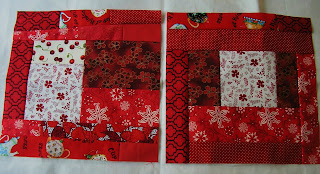 The theme for the Star of Africa Bee block this month was animals. Jen intends to put the blocks together as a book for her children to use for animal spotting on trips to the zoo. My block is not of an exotic animal, however, although there are plenty of those mentioned in the Bee discussions, instead I have produced for Jen a humble Black Cat. 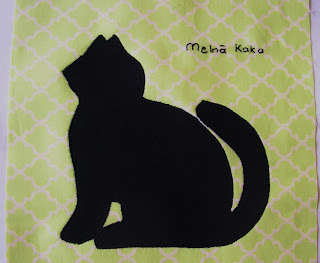 Not just any Black Cat though, the Black Cat of the house of the same name in Riga Old Town. The legend goes that a wealthy merchant sought to join the Great Guild of Riga and was rejected by the worthy citizens. Being a wealthy merchant though, the man (surprise, surprise!) did not take kindly to this rejection and as his house was directly opposite the Great Guild hall, took an unusual form of revenge for the snub. He placed a statue of a Black Cat on top of the tower nearest the Guild Hall, with the rear of the Cat facing the Hall. You can imagine the reaction of the worthy citizens! Several years and a lawsuit later the wealthy merchant was admitted to the Guild and the Black Cat statue was turned to provide a more fitting view for the Guild members! 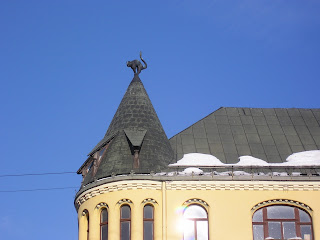 And here it is! You can see why the view from the back might have upset the worthy citizens :)

Linking up to TGIFF and BOM's away

Hope you all have a great weekend.
Posted by Celtic Thistle at 20:18