Welcome to February's New to Me Link Party. 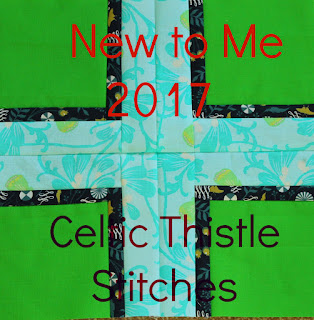 If you have been spending your time avoiding storms, floods or snowdrifts or whatever passes for bad weather in your neck of the woods, perhaps you have also had an opportunity to try something new to keep yourself occupied whilst the weather does its worst. If so, you are in the right place! The monthly New to Me link party is where we celebrate together the successes and failures of trying something for the first time. We all know that sometimes things don't quite go to plan and that practise really does make perfect, but we are here to commiserate when that first attempt doesn't turn out quite how you imagined it would and to celebrate on that rare occasion when it does!

My first New to Me this month has a bit of both sides of the coin in it.

I wanted to make some more dribble bibs for the gorgeous grandson so checked out Plush Addict's guide to the best fabrics to use and ordered some Plush fabric to back them with. Got to look after that little chin :)

I also wanted to practise my curves on the serger (aka The Beast!) and thought that a bib would be the ideal place to start. 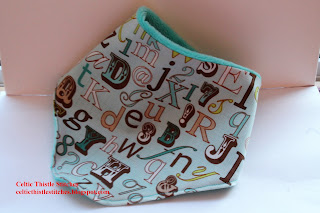 Well as you can see I successfully negotiated the curve! Cutting out the Plush fabric wasn't quite as easy as I had thought that it would be, so the back of the bib ended up a little bit bigger than the front, hence the lack of topstitching across the top and the rolled edge of Plush fabric. It is probably better for the baby soft chin that it will be next to, so it doesn't matter for this project but it might make a difference in another project so more practise needed on the cutting I think! 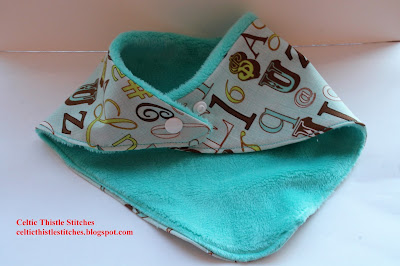 Looks nice and soft though doesn't it? It feels it too.


I have also been making some progress on my Boutis project, one of my 100 Day Challenge projects and the only one that involves a New to Me technique. 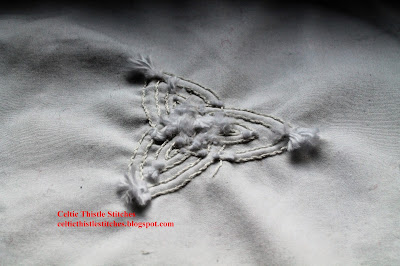 It doesn't look too neat here, but this is the back of the embroidery, the tufts you can see are the ends of the stuffing. I am enjoying having a go at the technique, but I cannot see a quilt of it anytime in my future :)

The third New to Me is something that I have known my sewing machine was capable of since I bought it over a year ago, but have only just got around to trying out. Again, I used a new bib for the boy as my practise piece! 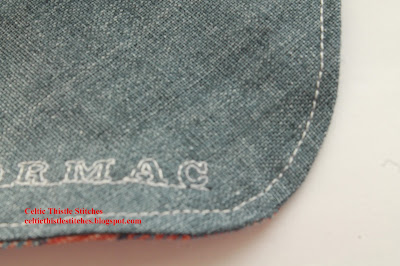 This bib has a linen denim-look fabric for the front and a checked flannel for the back. The front looked a bit plain so I decided to liven it up a bit by machine embroidering the gorgeous grandson's name on the front. It took a few reads of the manual before I worked out how to set it up, but it was really straightforward once I worked that bit out. I can see lots of monogrammed items in that young boy's future :)

My final New to Me is a new place, Portencross Castle, which was built on land given to the Boyd family by Robert the Bruce in thanks for their help at the Battle of Bannockburn. 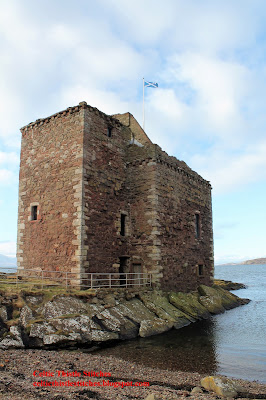 The castle which has had a long and varied history as you might expect, is reputed to have been a resting place for the ancient Kings of Scotland on their way to their last resting place on the island of Iona. It is also said to guard the wreckage of a galleon from the Spanish Armada fleeing Elizabeth 1's fleet. 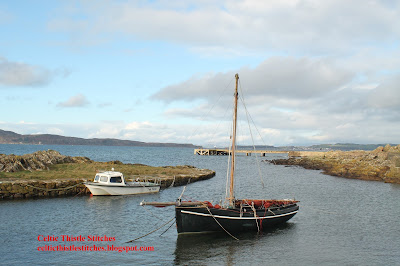 It was a much more peaceful place on the day that we visited.

So, that is my New to Me's for this month, now it is your turn to show and tell. As ever, the link party will remain open until 23.50 GMT on February 28th so there is still (some) time to try something new. Check out the other links to encourage and/or commiserate with our fellow bloggers who have moved out of their comfort zone. Grab the button from the sidebar and spread the word too.