Today's post has a very international flavour to it. I have finally got around to putting together some of my photos from our recent trip to Warsaw, and as you can see we had blue skies and brilliant sunshine for the whole of our time there. The sunshine was great when we were enjoying watching the passing parade with a refreshing ice-cream to hand, but not so great when we were lost trying to find the photograph exhibition at the last of the tenements in the old Ghetto! 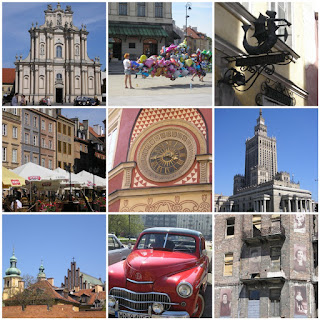 As you can see we did eventually find the exhibition (it is the right hand photo in the bottom row), which was a montage of photographs of Polish Jews donated by survivors and neighbours from the Jewish Ghetto in WW2. The last tenement is scheduled for demolition in the next year, so we were pleased to have been able to see this exhibition in its natural installation. The Old City was similar in some ways to its equivalent in Riga, but it was an odd experience walking around an Old Town that was, in fact, rebuilt almost entirely after WW2, but looked as though it had been there for over a hundred years.

Despite some lack of activity on the paper-piecing front recently, partly due it has to be said to trips like the one above, I have managed this week to get back into my NYB QAL blocks. Only one to add to the small, but growing, pile I admit, but I have now printed off all of the rest of the templates, so the spirit is willing! Next week will be the last week of the QAL, which has been interesting and frustrating at the same time. I am delighted that I have even been able to manage half of the blocks within the time frame, but frustrated that each one takes so long to do. Despite all the time and effort put in I will have nothing more than a pile of blocks to show for it at the end, unless I make even more blocks! 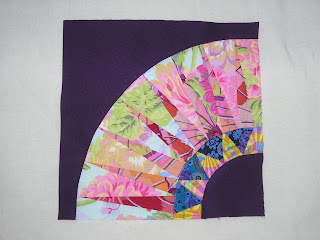 And for the final part of my international post, a bit of Japanese Zakka-style! This week's project in the SAL was a small pencil case, which has had some comments about quite how small it was i.e. not long enough to hold full-size pencils! It is, however, long enough for pens so I made his and hers versions, husband's for pens, mine for chalk and vanishing ink markers. I had thought of using mine for crochet hooks, as it is the perfect size, but as I only possess one crochet hook at the moment it seemed like overkill! 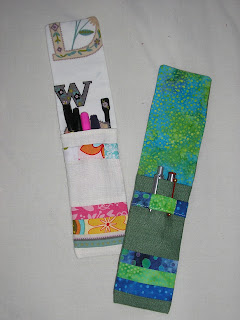 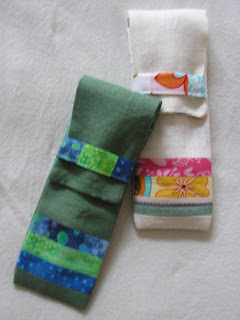 They were fairly straightforward to make, although it took me two attempts to sew the final stage as I managed to get the lining on the wrong way round in the first attempt and then the pocket inside on the second! That is when you wish you hadn't used linen for the outer plain fabric as ripping out seams on linen is no joke.

It is not much of a finish I admit, but I am linking up to TGIFF anyway, as this is about all of the finishes I am going to see for a while I think.