It is time for the next reveal for the Endeavourers and this time the theme is "Spirals",  yet again this has been both inspiring and challenging.
My initial thoughts on the theme were mostly nature related and Mother Nature definitely loves a spiral :) 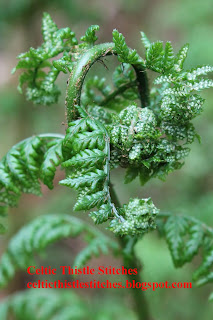 I struggled to think of a way to interpret these amazing ferns in a quilt form, so started to cast around for another form of spiral to use as inspiration.

As you might have guessed from my blog name I have always had a love of Celtic Art forms and when I realised that the spiral was an important element in Celtic Design, I knew that I had my inspiration!

We recently visited Islay, an island off the West Coast of Scotland, renowned for both its whisky and as the home of one of the finest, if not the finest, surviving Celtic Cross in Europe. 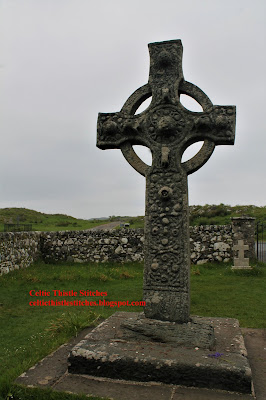 Kildalton Cross, above, was probably carved in the second half of the 8th Century A.D. It is pretty amazing to be able to stand in front of and touch something that has been around for so long! Celtic spirals, though, predate this Celtic Cross by several centuries. 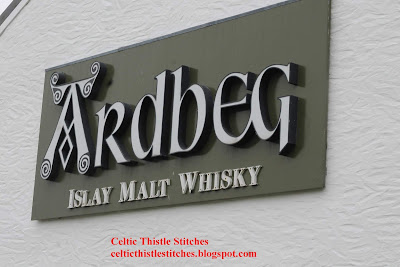 The spiral imagery used by this whisky distillery not far from the Kildalton Cross first began to develop in the later part of the 5th Century B.C. Who would have thought that it would still be in use so many hundreds of years later to sell whisky??

I knew that I wanted to combine these two aspects of Celtic imagery for this challenge (not the whisky although it was delicious!) but couldn't quite pin down what to do with them. 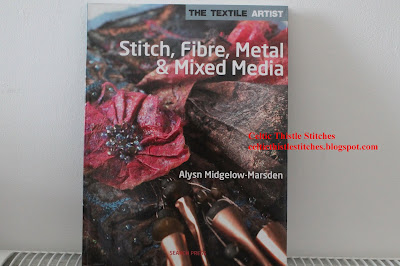 Then I came across a project in this book and it all became clear! 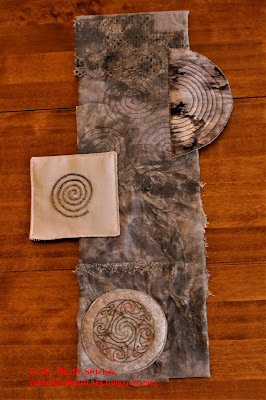 I have called this quilt "Echoes of times past" and if you want to find out how it was constructed head on over to the Endeavourers blog to read all about it and to see how my fellow Endeavourers have met this challenge.