Taking part in the Littlest Thistle's Foundation Paper Piecing for the Terrified (FPPFTT)has been great fun and a steep learning curve, but has also meant that I now have several paper-pieced orphan blocks. So, in a bid to find at least one of them a home I had backed and quilted the Circle of Geese block that we made in Week 4 with the intent that it would become a cushion to go with the quilt made for my son and daughter-in-law. So with no time like the present I set to this morning to add the back and finish at least one project this week! 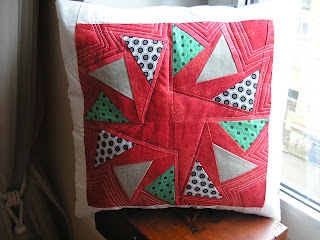 Initially I had intended to bind the cushion with some of the leftover binding from the Sew Happy Sampler Quilt that all of the fabrics in the cushion came from, but I decided that it was "over-egging the pudding" and left it as is. I am going to use another of the FPPFTT orphan blocks that was also made from leftover fabric from the Sew Happy QAL for another cushion for my son and daughter-in-law, so might use the leftover binding on that instead.

Talking of cushions I discovered when I was working on the sunflower quilt in the previous post that I had had a Dresden plate sunflower left over from piecing the quilt top. As I have yet to make the yellow cushion for my set of rainbow cushions, there are no prizes for guessing where this sunflower will end up :) 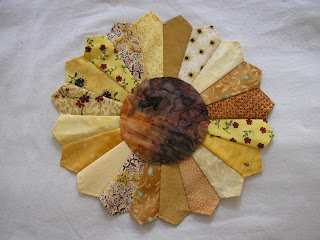 I have even more cushion plans in the coming weeks as I have now received the wonderful Indigo fabrics that I ordered recently from the African Fabric shop The fabrics were even lovelier than I had expected. 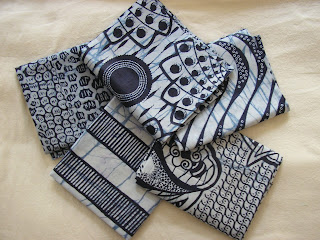 Originally I was planning to cut and piece the fabrics but having seen them I am now not so sure that I want to cut them up. I have (somewhere!) a pattern and instructions for a machined Trapunto cushion and I am now thinking that that might be better, as you will get the benefit of the full design. Having never attempted Trapunto before, I might be biting off more than I can chew though! As ever, all advice gratefully received!

This week I have also made a start on the first of the Zakka-style SAL projects, having missed the start I  am loath to fall too far behind. The first project is a tote bag with a zig-zag pattern made from quarter-square triangles on the front of the bag. One of the things that attracted me to Rashida Coleman-Hale's Zakka style books is her liberal use of linen as, unlike quilting cotton, linen is in plentiful supply in this part of the world. QST's are bad enough but QST's in linen that is a whole, different story! I have starched the linen squares and triangles to within an inch of their lives in an attempt to control them, but I am not sure that I am winning just yet. 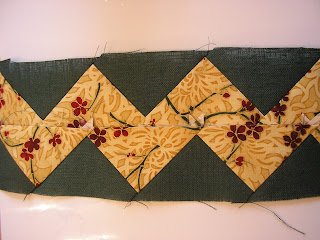 It took me all afternoon yesterday to get this much done. Ripping out seams on small linen triangles is definitely no joke! The plan is to give the finished bag to my mum for her knitting when we are home next, but at this rate it will be Christmas before it is finished.

Hope you are all having a productive week.
Posted by Celtic Thistle at 10:36