Work in progress - some faster than others!

Halfway through the month is a good time to reflect on my progress, especially in January when by now apparently most resolutions have been broken. Well my resolutions this year were to

Well I can tick the first two as I am taking part in the Sew Happy QAL and this post is evidence of the second.

For the third I have pieced and quilted this shades of green cushion, but have to admit that it was all done before Christmas and has been sitting waiting for more attention since then. However, I have also bought some green linen fabric that I think will be ideal for a cushion back so will plan to have that done for the end of the month! When I started putting these greens together from my scrap bag I had the idea that I could work my way through the colours of the rainbow for the cushions, which won't take up 12 months I know, but at least gives me a start. 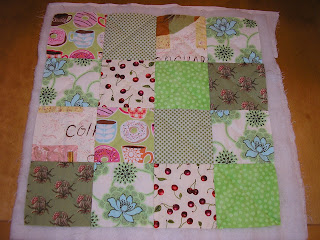 As for the 4th resolution to take part in a sewing swap that is still on the agenda but I have a whole year yet to complete that one so that isn't broken yet!

As well as joining up to the Sew Happy QAL I have also decided to tackle In Color Order's HST BOM quilt, I am nothing if not keen, so a happy hour was spent yesterday wading through my fabric stash to put together some fabrics for the first star. This task would have been a lot easier if my fabrics were in any sort of order but unfortunately they are not, one of these days .... (maybe that should have been one of my resolutions!) 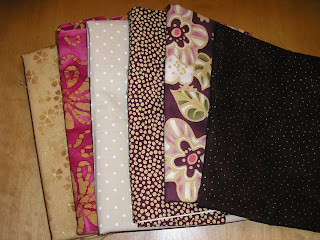 As well as patchwork I have also recently rediscovered my passion for cross stitching, not least due to the birthday present from my son of a copy of "Made in France, cross stitch and embroidery in red, white and blue by Agnes Delage-Calvet. The motifs are lovely and as they are in one colour, very easy to do whilst watching/listening to TV in the evenings. I have already finished one towel in red with her Russian Doll pattern, a teatowel in blue with the teapot pattern, a small purse in red with a wildflower pattern and I am halfway through another towel using four fish charts, and there are plenty more charts that I would like to do! 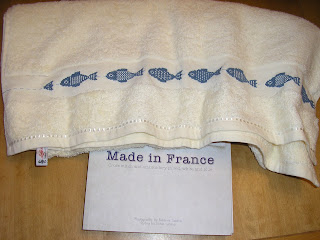 I think these are not bad beginnings for the year, so hopefully will bode well for the rest of 2012.
Posted by Celtic Thistle at 08:36