This year my Embroiderers Guild branch celebrates 20 years since it was founded. To commemorate this event all of the members have been asked to create a pincushion in a teacup, which will be distributed during afternoon tea at our last meeting of the year in May.

To kick start the members' thinking on the commemoration a recent meeting saw all of the members present creating a cupcake pincushion. We were given the silicon cupcake holder and scraps of fabric to do with as we wanted. 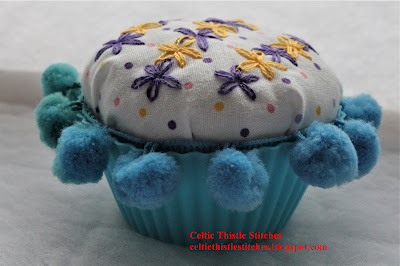 So, here is my cupcake pincushion.

The dots suggested flower centres to me, so I surrounded them with daisy chain stitches to create rows of flowers. The pompom trim, which was lurking in my ribbon stash, was the ideal match for the bright blue cupcake holder.

Another colourful addition to my stitching supplies!

I have also been on the lookout for a vintage china cup and saucer for our anniversary project. I was loath to break up any of the tea sets that I own, so have been searching the local charity shops for a lone china teacup and saucer that would fit the bill. All of the cups and saucers that I found in the local shops were being sold in pairs and as I didn't want to end up with an odd cup and saucer afterwards I have resisted making a purchase. 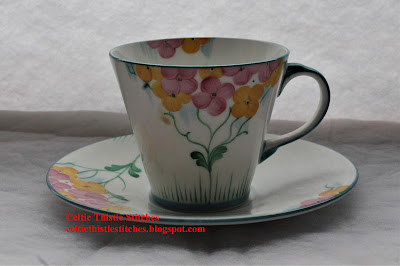 On our recent visit to Gravesend I came across this in a vintage shop and knew that it would be ideal for our commemoration project. The cup and saucer were originally being sold as a pair according to the ticket price but there was no sign of the second cup and saucer, so the owner was happy to sell me this lone cup and saucer.

I have an idea in my head of creating a flower garden for the pincushion and have pinned lots of ideas but time will tell whether that works out!

In the meantime at least I have started the process with the purchase of a cup!
Posted by Celtic Thistle at 00:00