I realised when looking at my photos that the only photos I have shared of the markets here were of the fish market. Now, whilst we like fish we do buy other things at the market, so this weekend on our weekly shopping trip and walk back through the Old Town I took some photos to give you an idea of the shopping opportunities in Riga! 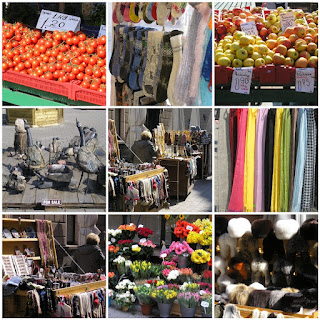 Now that Spring has (finally) arrived many of the fruit and veg stallholders have moved outside, so the area around the Market pavilions is a riot of colour. Later in the summer small stalls will be set up with people offering produce from their gardens and allotments. Last year we particularly enjoyed the tiny wild strawberries for sale on these stalls, so we are looking forward to trying more of them this summer. The time for fur hats has, thankfully, passed so the ones you see are aimed at tourists, who were out in force this weekend, so the fur lady and her neighbours selling knitted socks and gloves and amber jewellery will have been happy. The handicraft ladies ply their wares all year round so must be a very hardy bunch!

Although it felt like I spent a lot of time sewing over the weekend I don't seem to have much to show for it. I did, however, get last week's project from the Zakka-style SAL completed. 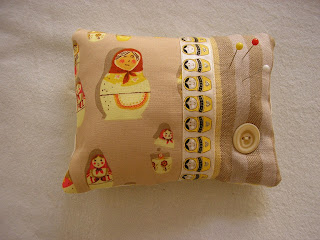 I have been hoarding the fabric and ribbon for a while so it was nice to finally find a use for them. I didn't have the right stuffing so made do with leftover wadding, so it is a bit lumpier than I would have liked. At least, though, it is finished which is more than can be said for the first project in the book, the zig-zag style tote. Having spent what seems like all week on this tote I am still some way from finishing and the photo below shows you why! 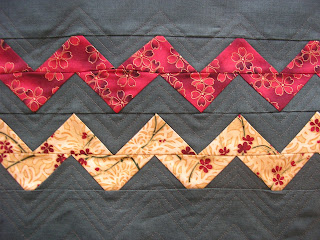 When I joined the zig-zag panel to the plain side panels to make up the front of the tote I lost my points on the edges! I was tempted, as you can see, to ignore this and make up the bag anyway, but have decided that this is all character building so am steeling myself to start all over on the zig-zags. I have also discovered (thanks Kirsty QP) that I am not the only one to have trouble with this project, so I don't feel quite so bad :) Check out Finding Fifth's  blog if you are struggling too.

As it is nearly the end of the month I am trying to catch up on my BOM's before I get behind again, so spent again what seemed like many hours hand-piecing hexagons for the Craftsy BOM for April. One down, one to go, hope there is something good on TV this week so that I can get stuck into the second block. 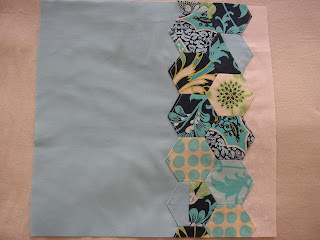 I only realised as I was sewing the last one down that I had intended to have both of the half-hexagons with the blue side on the white background. At 11.00p.m it was definitely not going to be changed!

When we  were in Tallinn a few weeks ago I found a copy of the craft magazine Mollie Makes so naturally snapped it up. The magazine had a pattern for a Crochet Flower Brooch, which caught my eye as it seemed reasonably straightforward for a non-crocheter. However, despite several attempts I have to confess to coming unstuck. 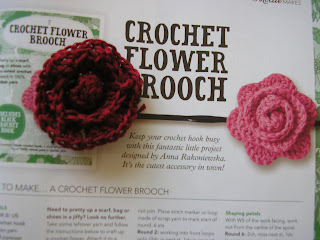 I am hoping the crochet experts amongst you can explain what the following instruction means (or point me in the direction of a good tutorial) as I cannot get my head around it. The pattern says "With RS of the work facing, work in a spiral towards the centre of the base. Work into both loops of Round 4, then into the unused loops of rounds 3, 2 and then 1 of the spiral base, until you have reached the very centre." Sorry, I have no idea what this means!!

We are heading off on a trip next weekend so I was hoping to take the crochet along to do on the plane,  hopefully someone will be able to help me out.

Hope your weekend was more productive than mine.

Linking up to BOM's away here , Freshly Pieced's WIP Wednesday here and Manic Monday here
Posted by Celtic Thistle at 12:52