With football on the TV last night, I had a great opportunity to crack on with the second block for April in the Craftsy BOM, as my other half would be too occupied to expect any conversation! The instructions for the second English paper pieced block produce a sun-ray block with a "grass" border, but that wasn't going to work with my colours, so I adapted it slightly by taking out the grass border and increasing the rays. 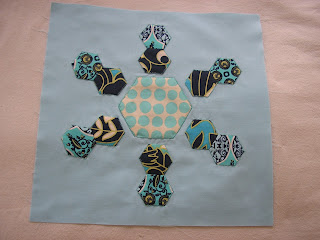 As this class is all about learning new skills, I decided to have a go at machine applique for the blocks too. I have only done this once before with circles and they are definitely easier to do, no corners to worry about! Originally I had planned to put some hexagons between the rays, but it ended up looking very cluttered, so decided against it. It might have worked with very small hexagons, but I have my limits!

The project for this week of the Zakka-style SAL is a small portable sewing pouch with another pincushion. I don't really use pincushions much but made it anyway. I am sure it will come in handy on our next road trip. No zig-zags involved so a doddle compared to the tote project, although I did manage to attach the leather thong the wrong way round so the long end was on the inside! It was a good thing that I had overestimated the length needed. 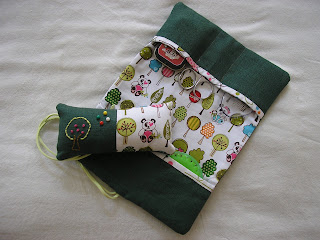 The interior fabric was a FQ from the bundle for my teatime quilt that was a bit too "babyish" as the quilt is for my mum, but was ideal for this. The embroidery motif on the pincushion is from Aimee Ray's Doodle Stitching. 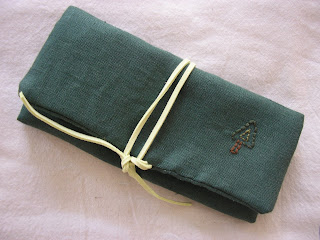 Next week's project is a pencil case, so should be fairly straightforward too, although some of the pieces seem very small!

Have been measuring and cutting away today, so will, hopefully have more progress to report soon.